“I feel very proud to be in Papua New Guinea to see for the first time how the money raised is helping to keep children healthy and safe, by providing live-saving therapeutic food for children suffering from malnutrition,” said Mr. Beckham in a press release issued by UNICEF.

Earlier this year Mr. Beckham launched his fundraising initiative 7: The David Beckham' UNICEF Fund, making a personal commitment to use his voice, influence and connections to raise vital funds and rally for lasting change for children.

UNICEF said that the Fund helps in delivering life-changing programmes for children across every region of the world, including those affected by malnutrition in Papua New Guinea.

According to UNICEF, in Papua New Guinea, one child in 13 dies before they age of five, mainly due to malnutrition adding that national statistics indicate nearly half the children in the country also suffer from stunting.

“At the start of this year, I launched my own Fund with UNICEF because I wanted to help build a safer world for children,” said Mr. Beckham.

“I believe that all children should be given the opportunity to reach their full potential and it's incredible to see the lengths UNICEF will go to in order to protect the most vulnerable and hardest to reach children,” he added.

Further, UNICEF said that Papua New Guinea is the first country Mr. Beckham visited on his worldwide tour that will see him travel to every continent on Earth for a BBC documentary about grassroots football that will be broadcast later in the year.

Mr. Beckham will culminate his journey by returning to Old Trafford on 14th November, where he will captain a Great Britain and Ireland star line-up against a Rest of World Team by Zinedine Zidane for The Match for Children.

UNICEF said that the match is slated to raise awareness and vital funds for the agency. 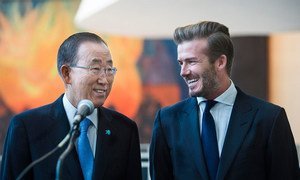 A unique installation that brings the voices of children and young people to the heart of the United Nations General Assembly was unveiled today by top UN officials, UN Children’s Fund (UNICEF) Goodwill Ambassador David Beckham and youth representatives from an initiative called ‘Voices of Youth.’