‘I will never stop calling for an end to the death penalty,’ Ban vows at launch of new UN publication

Vowing to never stop calling for an end to the death penalty, United Nations Secretary-General Ban Ki-moon today said studies have proven that those who are poor, mentally disabled, and/or are minorities are at higher risk of receiving the death sentence, regardless of guilt or innocence.

“That is simply wrong,” Mr. Ban said in his remarks at the launch of a book, Moving Away from the Death Penalty: Arguments, Trends and Perspectives, by the Office of the UN High Commissioner for Human Rights, at the UN Bookstore in New York.

The book documents injustices that are “sickening,” Mr. Ban noted, “but the arguments for change are compelling” and cited that “more and more countries and States are abolishing the death penalty” in all regions of the world.

“But there is also a backlash,” he warned, and expressed his deep concern that “some States are sentencing more people to death and others are resuming executions.”

Attending the launch was Kirk Bloodsworth of the United States, who is the first person exonerated from death row by post-conviction DNA evidence. He was introduced by UN Under-Secretary-General for Communications and Public Information Cristina Gallach. The Permanent Representative of Italy to the United Nations, Sebastiano Cardi, also made remarks.

“[Mr. Bloodsworth] represents the reason we are here today. He is totally innocent of any crime. But like too many other people, he suffered the unforgiveable injustice of a death sentence…I am conscious that he says he was not exonerated because the system worked but because of a series of miracles,” noted the UN chief.

Ivan Šimonovic, Assistant Secretary-General for Human Rights, speaks at the launch of the book, “Moving Away from the Death Penalty: Arguments, Trends and Perspectives”. UN Photo/Rick Bajornas 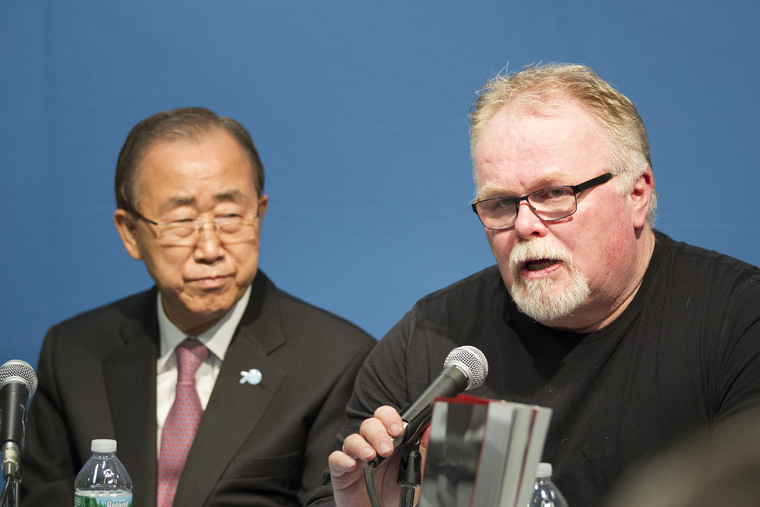 Kirk Bloodsworth, the first person to be sentenced to death and then subsequently exonerated, speaks at the book launching as Secretary-General Ban Ki-moon looks on. UN Photo/Rick Bajornas 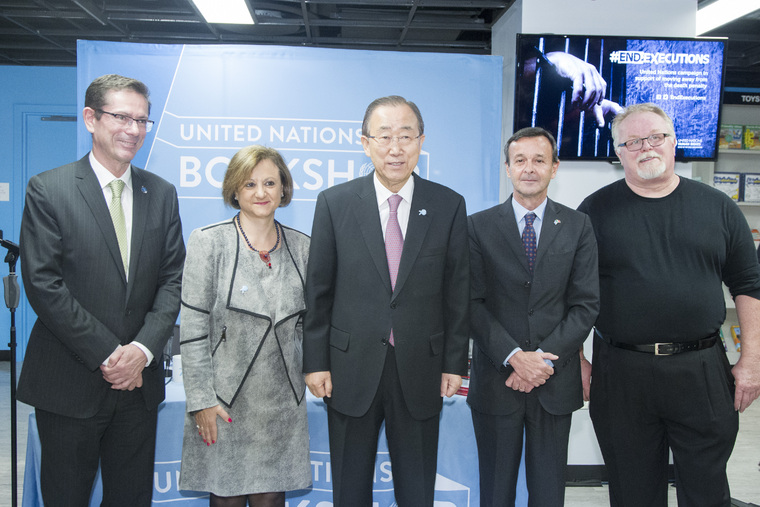 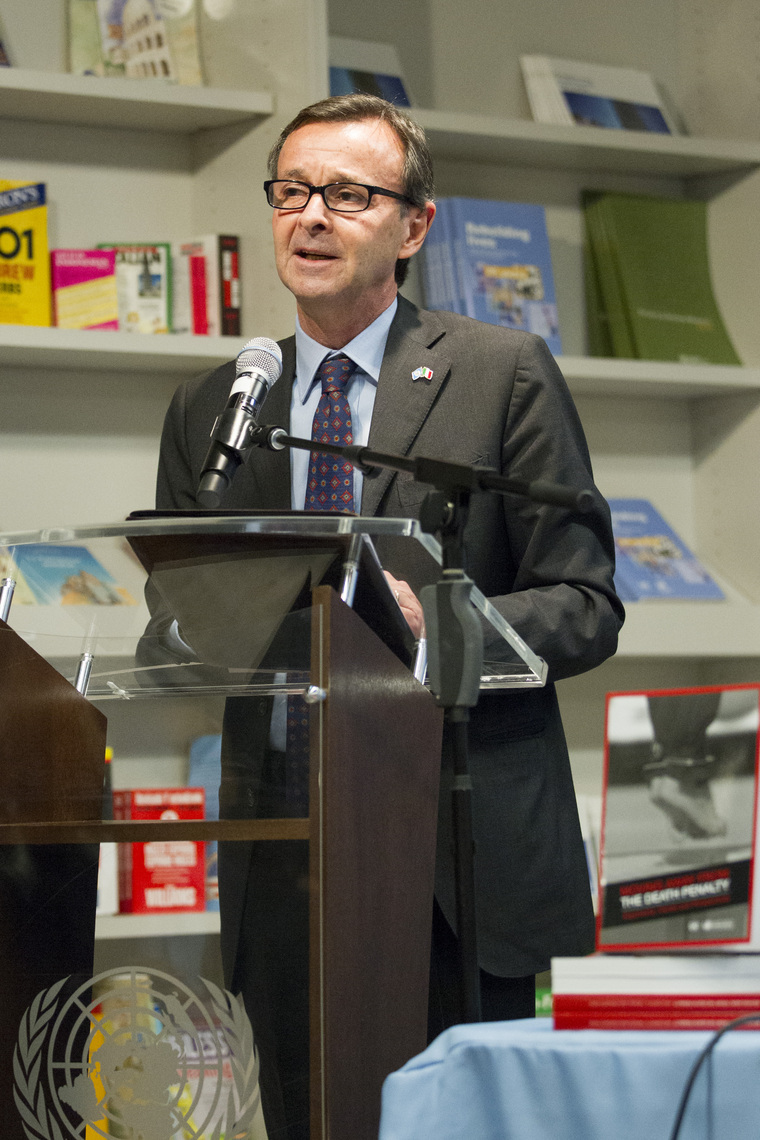 Ambassador Sebastiano Cardi of Italy, delivers remarks at the launch of the book. UN Photo/Rick Bajornas 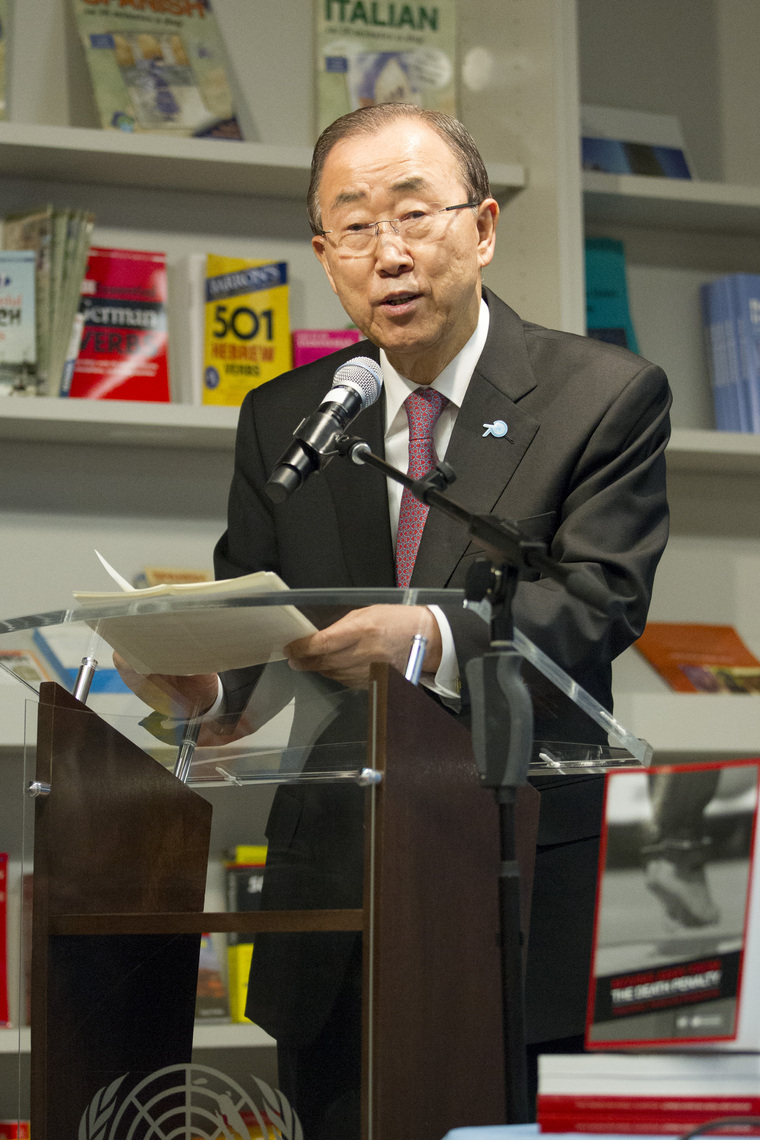 In an interview with the UN News Centre, Mr. Bloodsworth indeed said he was saved by a series of miracles. He had survived the terrible ordeal – “spending a total of 8 years 10 months and 19 days in prison for a crime I did not commit” – through faith in himself “and my belief that I knew I was an innocent person, and at the end of the day, the truth came out.Asked why he was personally against the death penalty, Mr. Bloodworth replied: “[It’s very simple: if it can happen to me it can happen to anyone; in America or anywhere. What I’m saying is that an innocent person can be executed and that should never happen. If it can happen to me it can happen to anybody anywhere in the world.”

But Mr. Šimonović said that in 2014, there had unfortunately been a 28 per cent increase in the number of people condemned to death and also noted that one of the biggest drawbacks of death penalties is the “wrongful conviction” of suspects.

The Secretary-General today seized on the phenomenon today, saying “there will always be wrongful convictions – but when States impose the death penalty in such cases, they also kill any hope for justice.”

And he also spoke of the “harsh reality” that the death penalty discriminates. Study after study proves that if you are poor, minority or mentally disabled, you are at higher risk regardless of guilt or innocence.”

“When we safeguard the human rights of the most vulnerable, we promote more peaceful, just and stable conditions for all,” he said.

“This book contains a great deal of information – but it makes no prediction on when the death penalty will be abolished globally. That is up to us. Let us write a new chapter so that the next edition may treat the death penalty the way we now treat public executions – as an aberration that is shunned in our world,” the Secretary-General concluded.

Ahead of the launch of a new book by the United Nations on the global trend away from the death penalty, the UN Assistant Secretary-General for Human Rights said today that there has been a decline in the number of countries upholding capital punishment in the last 40 years.