In the wake of recent violence against publishers, writers, bloggers and civil society groups by extremists in Bangladesh, the United Nations High Commissioner for Human Rights today condemned the acts and urged the Government to take “urgent, concerted measures to ensure the protection of all those who are being threatened by extremists operating in the country.”

“At least five Bangladeshi writers and publishers as well as two foreign aid workers have been violently murdered this year in Dhaka and many more attacked and threatened, apparently by groups that believe they have the right to impose their views on others through wanton violence,” Zeid Ra'ad Al Hussein said in a statement.

According to the High Commissioner's Office (OHCHR), last Saturday, publisher Faisal Arefin Dipan was hacked to death in his office in Dhaka, and in a separate incident, three people at another publishing house in the city were reportedly wounded.

The UN rights office said that Mr Dipan had published the work of a prominent blogger, Avjit Roy, who himself was hacked to death in February this year.

“There is an urgent need for a concerted response to prevent more killings by promptly bringing the perpetrators to justice, and by taking effective measures to protect writers, publishers and any other people in Bangladesh who are being threatened with violence. The State must not allow extremist groups to take matters into their own hands,” declared Mr. Zeid.

OHCHR reports that three other bloggers were also murdered this year for writing about sensitive social, political and religious issues and added that many others have received threats on social media, where a hit-lists targeting writers are being circulated.

According to OHCHR, this has prompted some of those threatened to flee the country or go into hiding.

“I urge political and religious leaders to consistently and unequivocally condemn this spate of vicious killings and threats against writers and publishers and anyone else who may be targeted by these takfiri groups,” Mr. Zeid said.

Lastly, he also stressed that the Government must ensure that journalists, civil society actors and human rights defenders are able to exercise their rights to freedom of expression and opinion without fear for their safety.

“When people have been explicitly threatened with violence or murder, it is the duty of the State to provide them with effective protection,” the High Commissioner said. 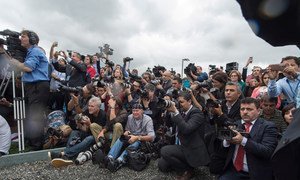 Marking the International Day to End Impunity for Crimes against Journalists, United Nations Secretary-General Ban Ki-moon is honouring journalists and media workers who were killed in the line of duty for merely ‘reporting the truth’ and is underscoring the importance of protecting their rights and ensuring they can report freely.