As the conflict over the future of Western Sahara nears its fortieth year, United Nations Secretary-General Ban Ki-moon is calling on all concerned, within the region and the wider international community, to take advantage of the “intensified efforts” of his Personal Envoy to facilitate the launching of true negotiations in the coming months.

“As the conflict over the future of Western Sahara and the human suffering it has occasioned near their fortieth year, the situation in north-west Africa is becoming increasingly alarming,” said Mr. Ban in a statement issued this evening by his spokesperson in New York.

Emphasizing that the conflict must be brought to an end if the people of the region are to meet their shared challenges and achieve their full potential, the Secretary-General in the statement recalled that the definitive status of this territory is the object of a negotiating process being conducted under his auspices in accordance with the relevant UN Security Council resolutions.

“I note with regret that the April 2007 proposals of the Kingdom of Morocco and the Polisario Front have not opened the way to the genuine negotiations for which the Council and I have repeatedly called,” the statement said.

Mr. Ban notes that at his direction, his Personal Envoy, Christopher Ross, has intensified his efforts to facilitate the entry of the parties into negotiations without preconditions and in good faith to achieve a mutually acceptable political solution, which will provide for the self-determination of the people of Western Sahara.

“They have yet to do so,” said the UN chief, adding: “I urge all concerned within the region and within the broader international community to take advantage of my Personal Envoy's intensified efforts to facilitate the launching of true negotiations in the coming months.”

Spain's colonial administration of Western Sahara ended in 1976. Fighting subsequently broke out between Morocco and the Frente POLISARIO. A ceasefire was reached in September 1991. The UN mission, known as MINURSO, is tasked with monitoring this ceasefire and organizing a referendum on self-determination in Western Sahara.

Morocco has presented a plan for autonomy, while the Frente Polisario's position is that the Territory's final status should be decided in a referendum on self-determination that includes independence as an option.

♦ Receive daily updates directly in your inbox - Subscribe here to a topic.
♦ Download the UN News app for your iOS or Android devices.
sahara

Western Sahara: UN announces next round of informal talks between the parties 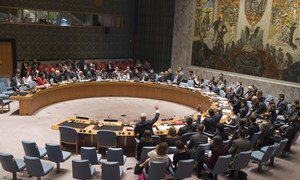 The Security Council today extended for another year the mandate of the United Nations mission tasked with monitoring the ceasefire in Western Sahara, known by the acronym MINURSO.