The United Nations human rights office expressed concern today over a worsening climate for opposition politicians and activists in Cambodia, and stressed that the right to peaceful assembly and to freedom of expression belongs to all.

According to the Office of the High Commissioner for Human Rights (OHCHR), 11 opposition activists are serving prison sentences of between seven and 20 years for participating in or leading an “insurrection.” Another opposition Member of Parliament is awaiting trial on charges that include incitement to commit crimes and forging public documents.

“We stress that the right to peaceful assembly and to freedom of expression belongs to all individuals, regardless of their political or other opinion,” OHCHR spokesperson Ravina Shamdasani told reporters in Geneva.

On what appears to be an organised attack last Monday, a group of pro-government protesters in Phnom Penh verbally and physically assaulted opposition Members of Parliament and threatened the safety of the private residence of the National Assembly’s First Vice-President.

Reports suggest that police and other state security forces looked on while the attacks took place – in stark contrast to their response to protests that have been organised in the past by groups criticizing the Government.

“It is the Government's responsibility to ensure that individuals are not targeted for their political affiliation or for expressing dissenting views,” said Ms. Shamdasani.

OHCHR welcomed the establishment of an investigative commission into last Monday’s incident, but stressed that the investigation would only be credible if it was “independent, impartial, thorough and prompt.”

“Those responsible for the violence must be brought to justice,” Ms. Shamdasani stated, while also urging the Government to take all necessary measures to ensure the security of all the democratically-elected representatives of the people of Cambodia, irrespective of their political affiliation. 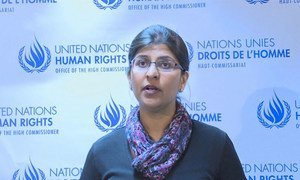 A draft law adopted today by Cambodia’s legislative wing “threatens the very existence of a free and independent civil society” and the crucial work that non-governmental organizations (NGOs) carry out in the country, the United Nations human rights office has warned.