<a href=http://bit.ly/1LvXDgK>Amy Stillman/IRIN</a>
Sulma Ortega and her family were victimized by the MS-13 drug cartel in Guatemala and granted asylum in Mexico. But they have received no help from the Mexican government to rebuild their lives there, and they are now looking to reach the US.
29 October 2015

Women in Central America and Mexico are fleeing their countries in rising numbers to escape a surge in deadly, unchecked gang violence, fuelling a looming refugee crisis in the Americas that demands urgent and concerted action by the States of the region, the United Nations refugee agency is warning.

“The violence being perpetrated by organized, transnational criminal groups in El Salvador, Guatemala, Honduras and certain parts of Mexico has become pervasive,” the UN High Commissioner for Refugees, António Guterres, said in Washington D.C., as he issued a new report on the situation entitled Women on the Run.

“The dramatic refugee crises we are witnessing in the world today are not confined to the Middle East or Africa,” Mr. Guterres continued. “We are seeing another refugee situation unfolding in the Americas. This report is an early warning to raise awareness of the challenges refugee women face and a call to action to respond regionally to a looming refugee crisis.”

The Office of the UN High Commissioner for Refugees (UNHCR) is calling specifically on all countries in Central and North America to recognize the growing refugee situation in the region, to establish adequate capacity at borders to ensure the identification of persons in need of international protection, and to move swiftly towards a coordinated regional approach to this problem.

According to UNHCR, ‘Women on the Run’ was based on interviews conducted with 160 women recently forced to flee their homes in El Salvador, Guatemala and Honduras – known as the ‘Northern Triangle of Central America,’ or (NTCA) – and parts of Mexico to escape growing violence in their communities.

They described in detail how criminal armed groups terrorize populations to establish control over large areas of these countries, and how women in particular are targeted by specific and extreme forms of gender-based violence.

“Everything affects you because there, a woman is worthless,” explained Lana, one of the women interviewed for the report. “It is as though your life is not worth anything. They rape. There is no limit. There is no authority. There is no one to stop them.”

While governments in the region have made efforts to address root causes of violence, people reportedly continue to flee. The region has some of the highest murder rates in the world, especially of women.

While the report finds that some of the women flee towards the United States, many others escape to neighbouring states in Central America and Mexico where applications for asylum from people fleeing the three NTCA countries and parts of Mexico – have skyrocketed thirteen-fold since 2008.

According to statistics by the United States Government, 82 per cent of 16,077 women from these countries who were interviewed by US authorities in the last year were found to have a credible fear of persecution or torture and were allowed to pursue their claims for asylum in the country.

♦ Receive daily updates directly in your inbox - Subscribe here to a topic.
♦ Download the UN News app for your iOS or Android devices.
women|refugee 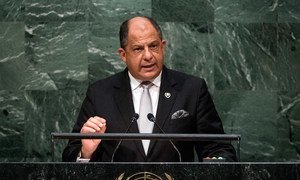 As the annual high-level segment of the General Assembly entered its third day, leaders from Central America stressed reform of United Nations institutions and the urgent need to bolster multilateral relations between States.