At a special meeting of the United Nations Human Rights Council today, the UN High Commissioner for Human Rights stressed that Israeli-Palestinian violence will draw “closer to a catastrophe” if not stopped immediately, while President Mahmoud Abbas called for creation of a “special protection” regime for the Palestinian people, amid roiling tensions in the region.

According to the Office of the UN High Commissioner for Human Rights (OHCHR), the latest wave of violence resulted in 58 Palestinian deaths, with 2100 wounded, and 11 Israeli deaths, with 127 wounded.

“Some of these people were stabbed, shot, and even beaten to death by members of the public, both Israeli and Palestinian,” High Commissioner Zeid Ra’ad Al Hussein told President Abbas and members of the Council, which is based in Geneva, Switzerland.

“In the context of suspected attacks, several Palestinians have been killed by Israeli security forces, sometimes allegedly acting with disproportionate force, to the extent that extra-judicial killings are strongly suspected,” he continued at the special meeting convened on the occasion of the Palestinian President’s visit.

“In other incidents, Palestinians involved in demonstrations in the West Bank and along the Gaza fence have been reportedly shot by security forces using live ammunition – raising strong concerns again about excessive use of force.”

Mr. Zeid added that the stabbing and shooting and car attacks that have targeted Israelis are also “totally unjustifiable.”

“No matter what the grievances on both sides, violence cannot be the answer,” he insisted. “This crisis is dangerous in the extreme because it is a confrontation drawn in part from that most combustible of human emotional mechanisms: fear.”

The High Commissioner underlined that it is a “confrontation between peoples who fear each other, who fear the corresponding motives of each other, and so fear the future.”

Fears that, unless checked quickly, Mr. Zeid said “become in time so raw, so stark – for many considerations of humanity will become secondary the longer this crisis continues.”

“There will be no mutual accommodation, no mutual acceptance, no warmth, no peace, only hate and bloodshed, and fear mixing, constantly, both into a poison for all,” he declared. “And the fears of one people are deepened by the actions and words of the other, also carved from fear, and heightened on both sides by visceral rage.”

He further stated that a “catastrophe” becomes more likely because of the “supremely sensitive issue” of the status quo with respect to occupied East Jerusalem, and specifically the site that is known to Muslims as the Al Aqsa compound or the Haram Al Sharif, and to Jews as the Temple Mount.

“For Palestinians, and the Arab and Muslim worlds generally, their fear has centred on the perceived increasing aggressiveness of Israeli attitudes toward this compound, strongly suggesting a desire to alter the status quo,” Mr. Zeid said. “The Israeli Government says this fear is misplaced, and believes that rumours have inflamed passions; repeated assurances have been given by the Prime Minister that there is no threat to the al Aqsa compound.”

“Fear must be eclipsed by wisdom,” the High Commissioner urged, calling for actions by the settler movement throughout the Occupied Palestinian Territory, particularly in and around occupied East Jerusalem, to be halted.

“The excessive use of force by Israeli military and police, house demolitions and other collective punishments also cannot be permitted to continue,” he warned. “The blockade of Gaza must be ended.”

Mr. Zeid concluded that in other words, the Middle East peace process “must now be reactivated with an unprecedented sense of purpose.”

“Israel has to be assured its security for good, and not remain the object of any threat to it or its people,” he said ending his address. “And the occupation, which has caused the Palestinian people such intense suffering for almost fifty years, generating rage and resentment – the occupation must end too. The people of Palestine, Mr. President, deserve to live free, and in dignity, enjoying their full rights, in their own liberated state of Palestine.”

In his remarks, President Abbas said: “What we have warned of has happened. The human rights in the Occupied Palestinian Territories, including East Jerusalem, as a result of the Israeli occupation and practices, are the worst and most critical since 1948.”

The current situation, he continued, calls for “strong and decisive intervention and requires that the United Nations, its Member States and its agencies shoulder their responsibility “before it is too late.” Specifically, the UN Security Council is requested, “more urgently than [ever before] to set up a special regime for international protection for the Palestinian people, immediately and urgently.”

Stressing that peace and stability would not be achieved unless the Israeli occupation is and an independent Palestinian state is obtained, Mr. Abbas said the he had repeatedly warned of the consequences of what has been happening in Jerusalem and its surroundings, which includes “tightening the noose around the necks of the population and violation of civil, political, economic and social rights.”

“I have noted over and over again that pressure will generate and explosion, and that the violations committed by settlers and extremists, protected by the Israeli Occupation forces, against our Christian and Islamic holy sites in Jerusalem, namely to alter the status quo of the Al-Aqsa Mosque…is the thing that will turn the political conflict into a religious on that will have grave consequences for us all.”

Reaffirming the important role of the Human Rights Council and the necessity of Israel abiding by its resolutions and wider international law, including the application of the Fourth Geneva Convention, Mr. Abbas also underlined what he called “the principal role” assumed by High Commissioner Zeid the work of the various experts and special procedures looking into human rights violations in the Occupied Palestinian Territories. 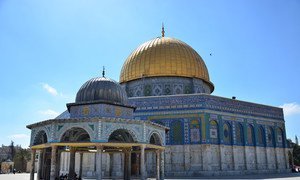