In a recent interview with UN Radio, Ismail Ould Cheik Ahmed said that the impending peace talks will be carried out for two weeks and the preparations are being planned in phases.

He said that the initial meetings would not encompass any direct talks between the two parties but be phased preparations, in Muscat between the Houthis and the General People's Congress, and in Riyadh with Government of Yemen.

“[These discussions] will really lay down the real basis on which the talk could take place in terms of agenda, […] the subjects which we will be discussing, […] the outcome and particularly managing the expectations,” said Mr. Ould Cheik Ahmed.

He observed that there is a deep lack of trust between two parties and added that this is a primary obstacle in successfully conducting the peace talks.

“We need to build confidence. We need to make sure that the two parties understand that there is no solution except a peaceful solution,” he added.

Mr. Ould Cheik Ahmed warned that unless a peaceful political solution is reached, Yemen will continue to be embroiled in a “terrible cocktail of dramatic humanitarian situation, continuous battle by air or on ground, shelling of cities, which is impacting civilians, and the increadible development of terrorist groups who are taking advantage of the situation.”

He also noted that UN Security Council resolution 2216 (2015) will provide as framework to the peace talks where the discussions, which will range from a complete ceasefire between the two warring parties, surrender of big weaponry and withdrawal of militias from the main cities.

The envoy also added that to ensure smoother discussions, there must be agreements on facilitating humanitarian access, release of prisoners and no provocation at the borders.

He also urged to both parties to cease talking through the media and said that making “statements do not help them.”

However, he did note that both parties are coming close to realizing that a political solution is the only possible solution to end the crisis.

He further suggested that all parties who are to join in the peace talks must ensure proper presentation and should participate with the intention of goodwill and to make a difference.

Lastly, he advised the international community and neighbouring countries, to help the in transition of Yemen after the resolutions made during the peace talks are implemented.

He also recommended setting up an internationally monitored mechanism that will ensure that there the norms of the ceasefire is respected. 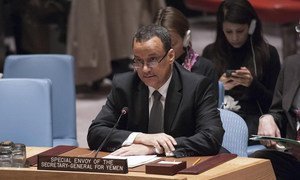 Citing the disastrous humanitarian consequences of the crisis in Yemen, the United Nations special envoy on the situation told the Security Council today that the ongoing violence has left the country “bleeding and its cities collapsing,” and he added that peace talks are the only way to restore the hope of Yemeni people “after all the suffering…crisis they have been victims of.”