United Nations human rights expert Ben Emmerson today urged governments across the world to ensure that civil society be included in global, co-ordinated efforts to counter the spread of terrorism.

Presenting his report to the UN General Assembly’s Third Committee, the Organization's main body dealing with social, humanitarian and cultural issues, Mr. Emmerson said that civil society is an “essential cornerstone of an open society.”

“The abuse of counter-terrorism measures to stifle legitimate opposition and to choke public interest and human rights organizations around world is gathering pace, and has become a first rank priority for the UN human rights mechanisms,” he said.

The Special Rapporteur on the promotion and protection of human rights and fundamental freedoms while countering terrorism then went on to warn of the spread of what he called an “ideological pandemic.”

“More than 60 States have proposed or passed laws during that time restricting freedom of assembly, or prohibiting the foreign funding and activities of civil society organisations,” he said.

He also said that civil society had not only been directly targeted by States adopting repressive legislation, but had also been affected by international and national measures aimed at countering terrorist financing, which had resulted in a “direct and chilling impact on public interest groups.”

“They have the unique ability to reach out to local communities,” said the Special Rapporteur, adding that they played “an integral part in the realization of longer term development goals.”

“States need to recognize, in all the regulation that is adopted, that lawful civil society organizations are not enemies of democracy and the rule of law, but key allies,” he concluded.

♦ Receive daily updates directly in your inbox - Subscribe here to a topic.
♦ Download the UN News app for your iOS or Android devices.
civil society 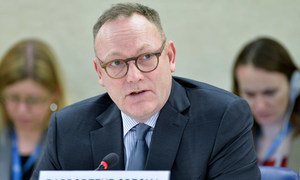