Amid growing fears that the irregular climatic activities of El Niño will result in severe weather events across the hazard-prone region of small islands and atolls in the Pacific, the UN Office for Disaster Risk Reduction (UNISDR) today addressed a gathering in Suva, Fiji, of disaster reduction and humanitarian response partners from across the region at a joint programme of events around regional resilience to disasters and emergency management.

“These coming months have the potential to be the most testing period in the history of the Pacific Islands. The region’s vulnerability was exposed during the World Conference on Disaster Risk Reduction in March when Cyclone Pam inflicted heavy losses on Vanuatu. Warming waters and rising sea levels resulting from climate change threaten the viability of life in many places in the region,” said Margareta Wahlström, Head of UNISDR.

Addressing the 2015 Pacific Regional Disaster Resilience Meeting she added that the event is the first in the region since the adoption of the Sendai Framework for Disaster Risk Reduction and will provide a platform for discussions ranging from the measures still required to ensure that the general public are risk informed and have access to early warnings and cyclone shelters.

Further, the event will include discussions on strengthening risk governance, investing in disaster resilient infrastructure and having plans in place to build back better after disaster strikes.

In a press release, Timothy Wilcox, Head of the Pacific Office for UNISDR, also reiterated that the region is a challenging environment for disaster risk management as it is exposed to extreme weather events.

“Parts of the region are now suffering drought and water shortages because of El Niño while others are preparing for the strong likelihood that they will be hit by high winds, storm surges and heavy rainfall in the months ahead,’ said Mr. Wilcox.

He also noted that the event will provide an opportunity for the region to examine how to implement the Sendai Framework, which was adopted as a global blueprint for reducing disaster losses earlier this year.

The event will be attended by representatives from government, local government, the private sector, the Secretariat of the Pacific Community, UN agencies, the UN Office for the Coordination of Humanitarian Affairs (OCHA), the International Federation of Red Cross and Red Crescent Societies and several non-governmental organizations.

“The Pacific region is well-placed to take a lead on showing the importance of being able to manage disaster risk as opposed to simply focusing on disaster response. A lot of good solutions will be shared this week,” said Mr. Wilcox.

OCHA is also responding to the climatic threats of El Niño by hosting the annual Pacific Humanitarian Partnership Meeting between 28th and 29th October to strengthen relationships between actors working in disaster response, resilience and recovery, as well as make preparations for the season ahead.

“Humanitarian needs are on the rise across the world. In the Pacific, countries are acutely vulnerable to a range of increasing natural hazards and the emerging impacts of climate change. It has never been more important for those working across development, humanitarian response and risk reduction to be synchronized,” Sune Gudnitz, Head of the OCHA, Regional Office for the Pacific said.

According to OCHA, approximately 4.5 million people across 11 countries in the Pacific are under the threat of El Niño.

The OCHA event aims to bring development and humanitarian actors together to commit to auctioning some of the outcomes from the World Humanitarian Summit regional consultations earlier this year. 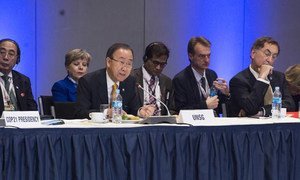 Stressing that financial resources are central to meeting the goals of the transformative 2030 Agenda for Sustainable Development Agenda, United Nations Secretary-General Ban Ki-moon today said that in order to create a low-carbon, climate-resilient future that benefits everybody, allocating appropriate finance is of key importance.