The cancer research arm of the World Health Organization (WHO) has determined that the consumption of processed meats like hotdogs, ham, sausages and meat-based sauces causes colorectal cancer, while eating red meat like beef, pork and lamb is “probably carcinogenic to humans.”

“In view of the large number of people who consume processed meat, the global impact on cancer incidence is of public health importance,” said Dr. Kurt Straif, Head of the International Agency for Research on Cancer (IARC) programme responsible for the findings.

After reviewing the accumulated scientific literature, a working group of 22 experts from 10 countries convened by the IARC, processed meat was classified as carcinogenic to humans based on sufficient evidence in humans that the consumption of processed meat causes colorectal cancer.

Processed meat refers to meat that has been transformed through salting, curing, fermentation, smoking, or other processes to enhance flavour or improve preservation. Most processed meats contain pork or beef, but processed meats may also contain other red meats, poultry, offal, or meat by-products such as blood.

The agency said examples of processed meat include hot dogs, or frankfurters, ham, sausages, corned beef, and biltong or beef jerky, as well as canned meat and meat-based preparations and sauces.

The experts “concluded that each 50 gram portion of processed meat eaten daily increases the risk of colorectal cancer by 18 per cent,” according to a press release issued today.

The association between red meat and cancer was observed mainly for colorectal cancer, but associations were also seen for pancreatic cancer and prostate cancer, it said.

“At the same time, red meat has nutritional value,” Dr. Wild said. “Therefore, these results are important in enabling governments and international regulatory agencies to conduct risk assessments, in order to balance the risks and benefits of eating red meat and processed meat and to provide the best possible dietary recommendations.”

The IARC Working Group considered more than 800 studies that investigated associations of more than a dozen types of cancer with the consumption of red meat or processed meat in many countries and populations with diverse diets.

The IARC’s mission is to coordinate and conduct research on the causes of human cancer, the mechanisms of carcinogenesis, and to develop scientific strategies for cancer control. 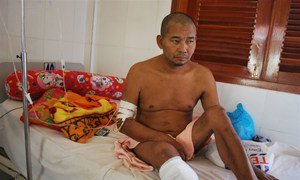 Challenging the world to get serious about the battle against “junk food,” a United Nations health expert today called on all countries to urgently adopt measures that promote the availability and nutritious value of healthy foods and regulate the marketing of sugary drinks, burgers, pizzas and potato chips – foods that, ultimately, are as deadly as they are tasty.