UNHCR
Families board a flight at Laayoune, Western Sahara, before departure for Tindouf in Algeria (April 2012).
23 October 2015

The United Nations refugee agency and its partners are scaling up aid efforts after devastating floods widely damaged Sahrawi refugee camps in southwest Algeria, working to provide food and relief supplies, while urgently appealing for emergency funds to fill the 80 per cent gap in order to reach the most vulnerable.

“UNHCR [Office of the UN High Commissioner for Refugee] is playing a leading role in the humanitarian response, working with the Sahrawi refugee population, as well as UN agencies [World Food Programme] and [UN Children’s Fund] and other partners,” said Amin Awad, Director of the Bureau for the Middle East and North Africa (MENA) and Refugee Coordinator for the Syria and Iraq situations., told journalists in Geneva during a briefing today.

This joint effort is delivering basic food and drinking water, as well as offering shelters to the homeless. Relief needs such as tents, bedding materials, and cooking tools will be airlifted over the next two days, according to UNHCR.

The rains, which began last Friday and are expected to last until Sunday, have flooded all five camps at Tindouf region completely or in part.

As a result, traditional Sahrawi tents and mud-brick homes, as well as other infrastructure, have been destroyed and damaged.

However, “UNHCR is urgently appealing to donors for emergency funds to respond to the flooding crisis,” he said, explaining that “UNHCR’s 2015 budget for the Tindouf operation is around just 20 per cent, leaving a huge funding gap and restricting operational activities.” 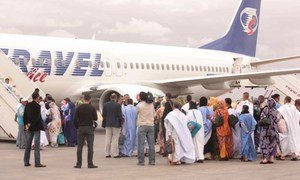 The United Nations refugee agency announced today that following many months of suspension, family visit flights between Sahrawi refugees living in camps near Tindouf, Algeria, and their families in the territory of Western Sahara has resumed.