The most senior United Nations relief official today urged the international community to increase their support for the humanitarian response in Cameroon, which is hosting more than 310,000 people who have fled conflicts in neighbouring Central African Republic and Nigeria.

“Deprived and traumatized families fleeing violence in the Central African Republic and Nigeria are being hosted by impoverished but generous communities, themselves facing daily hardship,” the UN Under-Secretary-General for Humanitarian Affairs and Emergency Relief Coordinator, Stephen O’Brien, said in a press release.

“The Government of Cameroon and communities have been very generous in providing protection and assistance to the displaced. The international community must do more to help alleviate the suffering of thousands of families,” he added.

According to the UN Office for the Coordination of Humanitarian Affairs (OCHA), Cameroon has witnessed a four-fold increase in the number of displaced people hosted since early 2014. The unrest in the Central African Republic has led to the influx of 251,000 refugees into Cameroon’s eastern regions, while cross-border attacks and suicide bombings by suspected Boko Haram elements have triggered the recent displacement of more than 150,000 Nigerian refugees and internally displaced Cameroonians in the Far North, the country’s poorest region.

“The attacks in the Far North of Cameroon are increasing in frequency. Entire communities have been uprooted from their homes. Tens of thousands of people have lost access to their fields and grazing land due to insecurity. In addition to responding to the life-saving needs of the displaced, I am deeply concerned about a spike in food insecurity in the coming months,” Mr. O’Brien continued.

During his visit to Cameroon, Mr. O’Brien met with Government officials and the humanitarian community, to discuss ways of improving assistance to the 1.3 million people chronically vulnerable to food insecurity and malnutrition, often due to the effects of hostile and changing climate.

“More than a million people across the country are food insecure; one in five of these families will go hungry without immediate food assistance.” said Mr. O’Brien. “I call on the international community to increase assistance to humanitarian organisations and the Government of Cameroon to better respond to the mounting needs. Refugees, internally displaced persons and their hosts all need more help to better cope with the extremely difficult circumstances. Women and children are particularly at risk.”

OCHA estimates that 1.8 million people across Cameroon urgently require the most basic assistance and protection. Meanwhile, the humanitarian community has appealed for $264 million, yet only 42 per cent of this has been received. 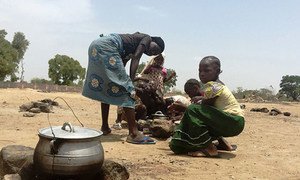 The humanitarian fallout from the violence inflicted by Boko Haram is the fastest growing crisis in Africa, a senior United Nations relief official warned today, appealing for concerted action on the humanitarian, security and development fronts to tackle the situation.