The United Nations expert on religious freedom is calling on all Governments represented at the UN General Assembly “to respect religious practices by children and their families and support families in fulfilling their role in providing an enabling environment for the realisation of the rights of the child.”

“Violations of freedom of religion or belief often affect the rights of children and their parents,” he said in a press release. “Children, typically girls, from religious minorities for example, are abducted and forcibly converted to another religion through forced early marriage.”

The rights expert also urged religious communities across the world to ensure respect for the freedom of religion or belief of children within their teaching and community practices, bearing in mind the status of the child as a rights holder.

“Religious community leaders should support the elimination of harmful practices inflicted on children, including by publicly challenging problematic religious justifications for such practices whenever they occur,” he stressed.

With regard to possible conflicts, the Special Rapporteur stressed the need for due diligence by the State when dealing with conflicting human rights concerns, ensuring non-discriminatory family laws and the settlement of family-related conflicts, and combating harmful practices.

“While in many situations of violations the rights of the child and the rights of his or her parents may be affected in conjunction, it is not always the case,” Mr. Bielefeldt noted. “The interests of parents and children are not necessarily identical, including in the area of freedom of religion or belief.”

“Parents are also not obliged to provide a religiously 'neutral' upbringing in the name of the child's right to an 'open future,'” he added. “The rights of parents to freedom of religion or belief include their rights to educate their children according to their own conviction and to introduce their children to religious initiation rites.”

According to the Office of the UN High Commissioner for Human Rights (OHCHR), the Special Rapporteur's report also discusses issues related to religious socialization, religious instruction within the family, participation in religious community life, religious education in schools, the voluntary display of religious symbols in schools; respect for the evolving capacities of the maturing child, and non-discrimination on the basis of religion or belief.

Special Rapporteurs are part of what is known as the Special Procedures of the Human Rights Council, an independent fact-finding and monitoring mechanism that addresses specific country situations. They do not receive a salary for their work and are independent from any government. 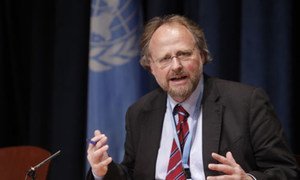 Amid escalating tensions throughout the Middle East, the country of Lebanon, known for its rich cultural diversity, can be a “ray of hope” for tolerance in a region beset by religious fanaticism, a United Nations human rights expert has said.