Smugglers will adapt as long as there is a market to exploit, warn UN experts on migrant rights

<a href=http://bit.ly/1KSGyJJ>Jodi Hilton/IRIN</a>
Migrants and asylum-seekers, mostly Syrian Kurds, sit in the yard outside a schoolhouse-turned-reception centre, known as Vrazhdebna, on the outskirts of the Bulgarian capital Sofia.
23 October 2015

Two United Nations experts on the human rights of migrants today called on the European Union to open regular and safe channels for migrants, saying “attempting to seal borders and the over-emphasis on the securitisation of borders is not going to reduce irregular migration in the long run.”

“Smugglers will continue to skilfully adapt, as long as there is a market to exploit,” wrote UN Special Rapporteur on the human rights of migrants, François Crépeau, and the Chair of the UN Committee on the Protection of the Rights of Migrant Workers and Members of Their Families, Francisco Carrión Mena, in an open letter released today.

According to the UN refugee agency, more than 644,000 refugees and migrants have arrived in Europe by sea so far this year, and of these, some 34 percent are women and children.

In their open letter, the experts voiced their “deep concern” at a recent UN Security Council resolution allowing the European Union to inspect, possibly seize and use force against boats off the coast of Libya in cases where reasonable grounds exist to suspect that such boats are being used for the smuggling of migrants from that country.

“International cooperation is certainly needed to combat organized criminal enterprises from engaging in such activities, but the Security Council resolution and EU Operation Sophia miss the mark,” they said.

According to their letter, EU Operation Sophia allows for EU naval vessels to board, search, seize and divert vessels suspected of being used for migrant smuggling and is an example of the States' “naivety” in thinking that sealing borders can work.

Saying that this operation cannot succeed at reducing the smuggling activities, as long as prohibition policies and practices create a lucrative market for smuggling people, the experts noted that “what is likely to happen is that smuggling operations will simply be diverted to other borders.”

“Countries can only effectively tackle smuggling if they take over the market,” the experts wrote.

“They must urgently provide safe regular channels for migration and places for refugee resettlement,” they said. “Without a regular alternative available to reach safety and the opportunity of building a future for themselves and their children, people will continue to pay smugglers and risk their lives through dangerous journeys.”

The experts called for commitment by all EU member States to resettle over a number of years “a meaningful number of refugees”, most probably in the millions.

”Whether considered migrants, asylum seekers or refugees, all are entitled to a protection response based on international law, in particular the human rights law, humanitarian law, and refugee law treaty framework,” the experts noted. 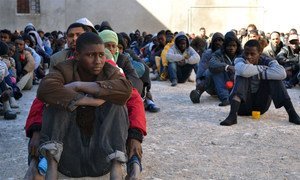