United Nations remains 'beacon for all humanity,' says Ban ahead of 70th anniversary

Marking the 70th anniversary of the Organization ahead of UN Day on 24 October, Secretary-General Ban Ki-moon said there is only one flag that belongs to everyone – the blue flag of the United Nations.

“National flags are a mark of pride and patriotism in every country around the world. But there is only one flag that belongs to all of us,” Mr. Ban said in a message. “That blue flag of the United Nations was a banner of hope for me growing up in wartime Korea.”

The UN chief underlined that seven decades after its founding, the United Nations remains “a beacon for all humanity.”

“Every day, the United Nations feeds the hungry and shelters those driven from their homes,” he declared in his message on the Day.

“The United Nations vaccinates children who would otherwise die from preventable diseases. The United Nations defends human rights for all, regardless of race, religion, nationality, gender or sexual orientation.”

He recalled that the UN's peacekeepers are on the frontlines of conflict; its mediators bring warriors to the peace table; and its relief workers brave treacherous environments to deliver life-saving assistance.

“The United Nations works for the entire human family of seven billion people, and cares for the earth, our one and only home. And it is the diverse and talented staff of the United Nations who help bring the Charter to life,” he said, referring to the document adopted in 1945 in San Francisco, where the Organization was born.

Mr. Ban also highlighted that this 70th anniversary is a moment to recognize the dedication of those who serve the UN, and to honour the many “who made the ultimate sacrifice in the line of duty.”

Noting that “no single country or organization can address today's challenges alone,” the UN chief stressed that the world faces many crises, and the limits of collective international action are “painfully clear.”

“The timeless values of the UN Charter must remain our guide. Our shared duty is to 'unite our strength' to serve 'we the peoples',” he continued.

To mark this anniversary, more than 300 monuments and buildings in more than 75 countries are being illuminated in UN blue from Australia to Azerbaijan, Indonesia to Iraq, Saudi Arabia to South Sudan.

“The Empire State Building is one of the most important landmarks in the world,” he told New York City officials and other guests, including Chinese musician Lang Lang.

“The United Nations is the 'Parliament of Humanity'. Today we come together,” he continued, noting that the Organization appreciates its “diverse, dynamic host city.”

Among the events scheduled for the day, the newest addition to Central Park's sculptural program will be unveiled in an historic ceremony presided over by the Secretary-General, President of the 70th session of the UN General Assembly Mogens Lykketoft, President of the Security Council Román Oyarzun, and President of the Economic and Social Council Mr. Oh Joon, together with New York City officials, including Commissioner for Department of Parks and Recreation Mitchell Silver.

Renowned Spanish artist Cristobal Gabarron honours 'UN70' through his interactive sculpture Enlightened Universe. The sculpture is comprised of a sphere surrounded by a spiral of 70 human figures – one for each of the 70 years since the UN was created.

The central sphere and its diameter of 6,371 millimeters are a tribute to the Earth, whose average radius measures 6,371 kilometres. The 70 figures form a universal chain of the human values defended by the UN – freedom, equality, solidarity, tolerance, respect for nature, shared responsibility, education and culture.

♦ Receive daily updates directly in your inbox - Subscribe here to a topic.
♦ Download the UN News app for your iOS or Android devices.
UN70|united nations 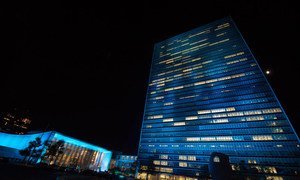