WHO Yemen
The World Health Organization (WHO) delivering water to residents of Taiz City, Yemen, where water scarcity is a major problem.
23 October 2015

The United Nations human rights office said today that the humanitarian situation in Yemen’s highland Taiz governorate is deteriorating rapidly in the wake of a recent attack by members of the Popular Committees affiliated with the Houthis which targeted residential areas and left 15 civilians dead, injured 73 others and left homes, shops, a clinic and a school partially destroyed.

According to the Office of the UN High Commissioner for Human Rights (OHCHR), the indiscriminate shelling in Taiz is only the latest incident impacting the area.

“We are concerned at the rapidly deteriorating humanitarian situation, which is being greatly exacerbated by checkpoints which were set up by the Popular Committees affiliated with the Houthis on the periphery of Taiz city in April. These checkpoints have been tightening their restrictions on the movement of the civilian population,” OHCHR Spokesperson Rupert Colville, told reporters in Geneva.

He further added that the members of the Houthi-affiliated Committees have taken control of the eastern route into Taiz and have blocked main supply routes from Sana’a, Aden, Ibb, Lahj and Hudaydah.

Mr. Colville detailed eyewitness accounts of the attacks, which began at around 4:15 in the evening, when shells fired from Houthis-controlled Al-Hawban area targeted a number of residential areas in the Al-Dhaboaha neighbourhood, hitting the Al-Mutahideen Clinic and five neighbouring homes.

Additionally, he said that the second round of shelling resumed later that night and that an estimated 18 shells were fired in same Al-Hawban area, targeting residential neighbourhoods in the city centre.

He further added that at least one shell hit the Hayel Saeed school, at least one shell landed near a mosque in Al-Awadhi Street, two shells struck a residential area near the fish market, and more shells hit shops in the city’s central market. A total of at least seven shells also struck the Al-Akhwah and the Al-Rawdha neighbourhoods.

Mr. Colville said that the civilians are currently struggling to meet even their basic needs such as potable water and added that the prices of water have increased by 300 per cent in the last week.

He also said that reports received by OHCHR indicate that members of the Popular Committees Affiliated with the Houthis and armed forces loyal to former President Saleh have prevented local traders and residents from crossing check points with water, fruit and vegetables and other essential goods.

Mr. Colville further said that the health system in Taiz is almost collapsing.

“At present, there are a total of six public and private hospitals that are partially functional in Taiz. Following the closure of Yemen International Hospital, the largest hospital in the city, smaller private hospitals with limited capacity have been overwhelmed with casualties caused by the fighting,” he said.

Lastly, Mr. Colville added that the on-going armed conflict in Yemen is taking a terrible toll on civilians as nearly 7,566 civilian casualties have been recorded this year, including 2,577 killed and 5,078 wounded. 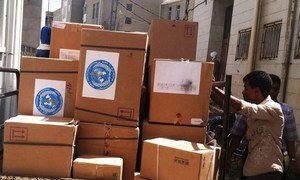 The top United Nations health official in Yemen is appealing for unrestricted access to Taiz, where “innocent lives are at risk” in the besieged highland city where more than 3.3 million people are in critical need of health assistance, safe drinking water, food and fuel.