<a href=http://bit.ly/1PvqDqR>Phil Moore/IRIN</a>
Bujumbura, the capital of Burundi, has been rocked by political violence for months.
23 October 2015

The Office of the United Nations High Commissioner for Human Rights (OHCHR) today expressed its concern over the “rapidly worsening” security and human rights situation in Burundi, where at least 198 people have been killed since April, including the execution of at least nine civilians ten days ago.

“We are particularly shocked at the deadly incident which took place on 13 October in the Bujumbura neighbourhood of Ngagara,” said OHCHR Spokesperson Rupert Colville, speaking at a press conference in Geneva today.

“At least nine civilians were reportedly summarily executed by police forces belonging to the API Unit (Appui pour la Protection des institutions, the Police Unit in charge of protecting state institutions),” said Mr. Colville, “including a well-known cameraman of the National Radio and Television of Burundi (RTNB), Christophe Nkezabahizi, his wife, their two children and an IOM staff member living in the same compound, Evariste Mbonihankuye.”

“While police forces were searching houses in the area, members of the Nkezabahizi family were reportedly called out of their home, lined up and shot in cold blood,” he continued. “Reports suggest the IOM staff member was wearing his UN-ID but was still shot dead.”

Mr. Colville also noted that, despite previous reports of attacks against humanitarian personnel, this is the first time a humanitarian worker has been killed by security forces since the beginning of the crisis.

The incident, he said, was apparently triggered by an attack on three API police officers by an armed youth. One officer was killed and another was injured. Four other people, including a minor, were also reportedly killed by the police in a separate incident at the same location on the same day.

“We welcome the establishment by the Attorney General of Burundi of a commission of enquiry to investigate the Ngagara incident and we call for this investigation to be transparent, impartial and in line with international and national human rights standards,” said Mr. Colville. “We urge the authorities to issue clear instructions to all members of their security forces that acts such as this will be punished with the full force of the law.” 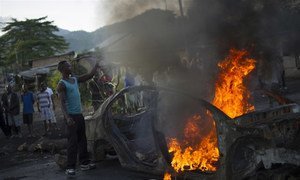