Saying human rights have been largely absent from discussions of urban development at a time when more than half the world’s population lives in cities, the UN independent expert on adequate housing today challenged governments to end homelessness and improve living conditions for all.

“I am convinced we can end the scourge of homelessness and improve living conditions for over a billion people worldwide,” Leilani Farha, the UN Special Rapporteur on adequate housing said as she presented her latest report to the UN General Assembly’s Third Committee – the Organization’s main body dealing with social, humanitarian and cultural issues.

Her report describes how urban centres are facing a future where vast inequalities are growing, segregating those who have resources from those who do not.

With the right to adequate housing as a pillar, the report notes, a human rights framework can provide the coherence and consistency sorely needed in the so-called ‘New Urban Agenda’ to achieve sustainable, inclusive cities for all – a goal also of the just-adopted A HREF="http://www.un.org/sustainabledevelopment/sustainable-development-goals/">Sustainable Development Goals (SDGs).

“Human rights have been largely absent from discussions of urban development,” Ms. Farha said as she launched a yearlong campaign to ensure that a human rights framework is included in all aspects of the New Urban Agenda.

In the wake of the adoption of the SDGs and in the lead up to Habitat III, the UN Conference on Housing and Sustainable Urban Development scheduled for October 2016, the human rights expert said “we have an exceptional opportunity to change the way we think about cities, not only as engines of development but also as places where human rights are realized and celebrated.”

Habitat III will be the first global summit of the 21st century where housing and urban challenges will be in the spotlight.

“Major housing issues confronting cities such as the wild growth of informal settlements, social exclusion and increasing homelessness will only be solved if the right to adequate housing is properly understood and incorporated into all aspects of urban development,” she said.

She also said she was “firmly committed to working closely with local and national governments, UN agencies, civil society and private actors to ensure a strong human rights outcome in Habitat III.”

Ms. Farha took her function as the UN Special Rapporteur on adequate housing in June 2014. As an independent expert in the UN Human Rights system, she works on a voluntary basis, is not UN staff and does not receive a salary for her work. 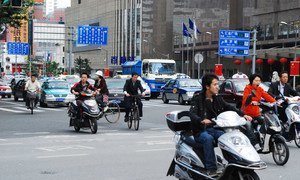 Warning of unprecedented shifts in population in urban areas of the Asia and Pacific – already home to 17 of the world’s megacities, with populations exceeding 10 million – the United Nations today launched a new report that highlights the region’s urban transformation progress and underscores the urgent need to make it more sustainable.