The top United Nations human rights official today strongly criticized the detention of migrants and refugees in the Czech Republic, drawing attention to the violations of the rights of children among them and to credible reports that authorities are routinely strip-searching migrants to confiscate the $10 a day they are charged for their own detention.

“The fact that people are being forced to pay for their own detention is particularly reprehensible,” said UN High Commissioner for Human Rights Zeid Ra’ad Al Hussein Zeid.

He also expressed “alarm that the detention policy is accompanied by an increasingly xenophobic public discourse, including repeated Islamophobic statements by President Miloš Zeman, and a public petition ‘Against Immigration’ launched by former President Záclav Klaus.”

Mr. Zeid’s Office (OHCHR) said the Czech Republic “is unique” in routinely subjecting these migrants and refugees to detention for 40 days, and reportedly sometimes even longer – up to 90 days – in conditions which have been described as degrading.

“According to credible reports from various sources, the violations of the human rights of migrants are neither isolated nor coincidental, but systematic: they appear to be an integral part of a policy by the Czech Government designed to deter migrants and refugees from entering the country or staying there,” Mr. Zeid said.

“Many of these people are refugees who have suffered horrendously in their countries of origin as well as during their journey to the Czech Republic,” the High Commissioner said.

Mr. Zeid also singled out the violations of the rights children among those in detention.

“International law is quite clear that immigration detention must be strictly a measure of last resort. And as for children, the UN Committee on the Rights of the Child has emphasized that detention of children on the sole basis of their migration status, or that of their parents, is a violation, is never in their best interests, and is not justifiable,” he said.

He noted that most detained migrants and refugees are not in a position to swiftly challenge their detention in court – as is their right – because they do not receive information about free legal aid and because civil society organizations have reportedly been receiving very restricted access to detention facilities.

Mr. Zeid also expressed concern about the conditions in the detention facilities, particularly in Bìlá-Jezová north of the capital, Prague, which the Czech Republic’s own Minister of Justice Robert Pelikán has described as being “worse than in a prison.” The Minister criticized the detention policy itself, saying that the migrants “had committed only an administrative offence, for which they should not be locked up for up to 90 days.”

He also welcomed the 13 October report by Czech Ombudsperson Anna Šabatová, who spoke of parents being treated in a degrading way in front of their children, who are traumatized by the constant presence of heavily armed personnel. At the time of her visit, there were 100 children detained in Bìlá-Jezová.

Mr. Zeid also referred to credible reports that migrants have been routinely strip-searched by the authorities looking to confiscate money in order to pay the $10 per day each person is charged for their involuntary stay in the detention centres. This payment is demanded by the authorities from all migrants, without clear legal grounds, leaving many of them destitute upon their release. 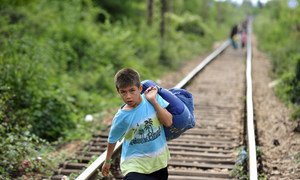 Warning of poor weather conditions and fast-approaching winter, the United Nations Children’s Fund (UNICEF) today raised concerns about the protection of unaccompanied refugee and migrant children on the move in Europe, where several countries are faced with overstretched national capacities and insufficient coordination.