United Nations human rights experts today urged the Government of Qatar to release Mohammed al-Ajami, a poet who is currently serving a 15-year prison sentence for writing and reciting a poem at his home.

“The arrest, detention and sentencing of Mohammed al-Ajami in October 2013 seem to be solely related to the peaceful exercise of his fundamental human rights,” said the UN Special Rapporteur on freedom of expression, David Kaye.

Mr. al-Ajami was arrested in 2010 for reciting one of his poems in his house, which criticized the Crown Prince of Qatar while praising the Tunisian revolution and denouncing corruption and oppression by Arab rulers. He was initially sentenced to life imprisonment, which was reduced to 15 years after an appeal made in 2013.

“The 15 years prison sentence against this poet is also particularly worrying, as we have received serious indications that the criminal process did not meet all the judicial guarantees of a fair trial,” stressed the Special Rapporteur on the independence of judges and lawyers, Mónica Pinto.

The UN Special Rapporteur on cultural rights, Farida Shaheed also insisted that Mr. al-Ajami’s sentence is ‘disproportionate and amounts to political censorship to art and expression.’

“Artists have the right to dissent, to use political, religious and economic symbols as a counter-discourse to dominant powers, and to express their own belief and world vision,” said Ms. Shaheed.

The Special Rapporteurs collectively agreed that legal provisions provided to justify the penalty are contrary to the Universal Declaration of Human Rights, which protect the right to freedom of opinion and expression including in the form of arts.

They stressed that penalizing criticism against the Emir’s and Vice-Emir’s authority is in violation of international standards.

“Laws restricting the right to freedom of expression must never be used as tools for silencing the criticism of authorities and promoting political censorship,” Mr. Kaye stressed.

Mr.al Ajami's case has been followed closely by the UN experts and the matter was also raided with Qatari authorities by several UN human rights mechanisms since 2012. 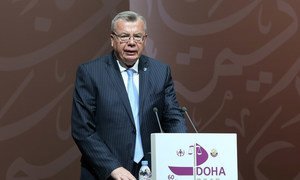