UNICEF/ Myo Thame
Women carry food to their camp at Kalay township in Sagaing State, northwest Myanmar, which suffered some of the worst devastation from floods in the area.
20 October 2015

A new joint United Nations agency-Myanmar Government report paints a grim picture of the destruction caused by flooding in the country, where more than half a million hectares of rice paddy were affected and almost a quarter of a million livestock were killed, including poultry, cattle, pigs and goats, when Cyclone Komen struck in late July and early August this year.

A press release on the findings, compiled by the Government alongside the Food and Agriculture Organization (FAO) and the World Food Programme (WFP), reveals rice to have been the most-affected crop, with an expected slash in production of up to 89 per cent in damaged paddy fields, compared to the same time last year.

Some parts of the country lost entire paddy plantations. Seeds, fertilizers and tools were also lost in the disaster, says the report, underscoring that many farmers risk missing the start of the upcoming winter and summer agriculture seasons.

More than 250 thousand livestock have been lost in the six worst-affected regions/states assessed, which hit women especially hard as they are generally in charge of these animals. For restocking of small livestock FAO and WFP highlight the provision of animal feed and vaccines for preventing the spread of disease and supporting the survival of animals.

Flooding was also devastating for the aquaculture and fishing industries in Myanmar have also been affected based on FAO’s and WFP’s observation in worst-affected regions, with almost 30,000 hectares of fish and shrimp ponds gone, as well as fishing equipment, such as nets, traps, boats and engines.

FAO and WFP stressed that the states and regions of Ayeyarwady, Bago, Chin, Magway, Rakhine and Sagaing were among the worst-affected by the floods, and most families in those areas are heavily dependent on agriculture for their livelihoods.

Cyclone Komen struck Myanmar in late July and early August this year, bringing strong winds and additional heavy rains to Myanmar, resulting in floods and landslides. According to the National Natural Disaster Management Committee, 122 people lost their lives and up to 1.6 million people were displaced.

“Half of all losses were in agriculture, in regions where people rely on crop production and livestock to feed their families,” said Bui Thi Lan, FAO Representative in Myanmar. “We must urgently meet the immediate needs of these families, support agricultural recovery and help them rebuild resilient livelihoods to cope better with future crises.”

WFP Resident Representative and Country Director Dom Scalpelli highlighted the need for urgent asset creation programmes to benefit the most vulnerable and food-insecure communities. “These activities will provide the necessary cash to cope with the immediate emergency needs as well as help rehabilitate productive assets for early recovery after the shock,” he said.

WFP and FAO also warned that the flooding could have other consequences for poverty and economic development. Additional findings of the assessment show that affected populations have begun to engage in “distress coping mechanisms such as borrowing money and selling productive assets in order to access food.”

The report concludes that rehabilitation of infrastructure, such as irrigation schemes, has been identified as a priority by affected populations assessed. 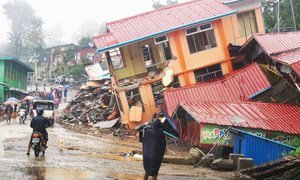 Myanmar has suffered heavy rains, winds and flooding since Cyclone Komen made landfall in Bangladesh on 30 July, causing landslides and damage in different parts of the country, according to United Nations agencies.