WFP/Abeer Etefa
In Ukraine, cash and food voucher assistance by WFP allow people to go to the market and pick the food they prefer.
20 October 2015

The World Food Programme (WFP) today announced that after a three-month suspension, it has restarted humanitarian activities in the non-Government-controlled area of Donetsk city in eastern Ukraine.

In a press statement, the UN agency said that two truck convoys, carrying enough food for nearly 16,000 people for one month, had reached Donetsk over the past five days.

“This food will help people who have been displaced by the conflict, who have lost their jobs and left their homes, and who have been deprived of humanitarian assistance for the past three months,” said said WFP Head of Office in Ukraine Giancarlo Stopponi.

More convoys will be bringing food to provide assistance to 20,000 vulnerable people. WFP is coordinating the food distribution through its partner People in Need, an international non-governmental organization.

The agency also highlighted the challenges humanitarian organizations are facing in getting access to nearly 5 million people who are affected by the conflict that began in the region in April 2014.

During the three months of suspension, WFP said that it continued to provide assistance to people in Government-controlled areas of both Donetsk and Luhansk and in areas near the frontline and in buffer-zone villages.

The agency added that it is concerned about the needs of the most vulnerable people and those who had to flee their homes, especially since winter is approaching. 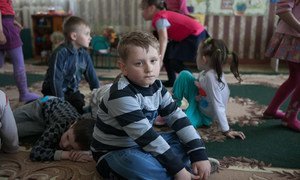 With Ukraine’s Ministry of Health recently confirming two cases of polio in the country, the World Health Organization (WHO) and the United Nations Children's Fund (UNICEF) are calling for an immediate polio vaccine campaign in the country.