Ahead of UN Day, marked annually on 24 October, the United Nations announced today that around 200 iconic monuments, buildings, museums, bridges and other landmarks in nearly 60 countries around the world will be lit up blue – the official colour of the Organization – as part of a global campaign to commemorate its 70th anniversary.

“This is an initiative led by the [UN Department of Public Information] and has had tremendous support from governments, cities, mayors, and locally in many countries [from] information centres, to ensure this collaborative public awareness of the UN Day,” Under-Secretary-General for Public Information Cristina Gallach told reporters at a press conference in New York.

Ms. Gallach said iconic landmarks – from Australia's Sydney Opera House to the Great Pyramids of Giza in Egypt and from the statue of Christ the Redeemer in Rio de Janeiro to the Empire State Building in New York – will be lit blue.

Other sites will include Russia's Hermitage Museum, the ancient city of Petra in Jordan, the Leaning Tower of Pisa in Italy, Edinburgh Castle and Central Hall Westminster in the United Kingdom, Table Mountain in South Africa, Japan's SkyTree Tower and the Alhambra in Spain, among many others.

“I am grateful our Member States are showing such strong enthusiasm in marking 70 years of UN support for peace, development and human rights,” said UN Secretary-General Ban Ki-moon in a press release.

“By turning the world UN Blue for a day, we can light the way to a better tomorrow,” he added.

The global celebration will kick off in New Zealand and then Australia with the lighting of the Sydney Opera House at dusk, and from there, a wave of UN blue will move across countries and continents as monuments around the world take part in the international event.

United Nations Headquarters in New York will light up for two nights, beginning on Friday when the annual UN Day concert will be held, sponsored by the Permanent Mission of the Republic of Korea.

The lead performers are the Korean Broadcasting System (KBS) Symphony Orchestra; they will be joined on stage by UN Messenger of Peace Lang Lang, the Harlem Gospel Choir and K-Pop duo Davichi.

Meanwhile, on Saturday afternoon in New York City's Central Park, UN Secretary-General Ban Ki-moon and the President of the General Assembly, Mogens Lykketoft will attend the unveiling of a new art installation dedicated to the United Nations.

Created by Spanish artist Cristóbal Gabarrón, Enlightened Universe features 70 life-size figures – representing the 70 years of the Organization – joined hand in hand around a huge globe. The figures are designed to represent a human chain of global citizens, joined in solidarity, tolerance, respect for nature and shared responsibility.

In New York’s Central Park, Ban unveils sculpture depicting ‘great hope all of us have invested in the UN’ 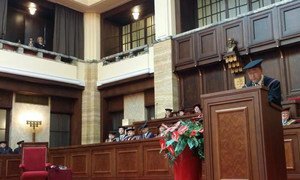 During a visit to the capital of Slovakia today, the United Nations Secretary-General inaugurated an exhibition commemorating the 70th anniversary of Organization, featured at the National Council of the Slovak Republic.