Warning of unprecedented shifts in population in urban areas of the Asia and Pacific – already home to 17 of the world’s megacities, with populations exceeding 10 million – the United Nations today launched a new report that highlights the region’s urban transformation progress and underscores the urgent need to make it more sustainable.

“Urban demographics will magnify our challenges, as they accompany steeper growth in national outputs, which already outpace population growth. Growing demand will increase policy and resource pressures, as our cities will be home to a middle class of 2 billion people by 2050, said Shamshad Akhtar, the Executive Secretary of the UN Economic and Social Commission for Asia and the Pacific (ESCAP).

The report, State of Asian and Pacific Cities 2015: Urban Transformations’ shifting from quantity to quality, compiled by ESCAP and the UN Human Settlements Programme (UN HABITAT), highlights growing gaps between current urbanization patterns and what is needed to shift to a more inclusive and sustainable urban future, in which the role of the region’s cities is unquestionably tied to national, regional and global development prospects.

Launched during the Sixth Asian Pacific Urban Forum (APUF-6), taking place in Jakarta, Indonesia, the report states that in 2018 the region will have more than half of its population is expected to then be living in urban agglomerations. Additionally, a further one billion people will be added to the region’s cities by 2040 and by 2050 the urban population in Asia and the Pacific will reach 3.2 billion.

Currently, the region is home to 17 megacities, each of which exceeds 10 million inhabitants. According to the report, the region will have 22 megacities by 2030.

The report states that the current economic dynamism in the region’s urban areas that has spurred a rise in the size of middle classes still witnesses widening gaps and growing inequalities.

Youth employments, rising number of urban poor, lack of rights, rising urban living costs, lack of access to adequate services and housing are some of the challenges facing the urban population.

Widening disparities threaten to undermine social cohesion, and affordability is at a crisis point in many of the region’s larger cities.

The report also highlights the environmental challenges facing the urban cities of Asia-Pacific where an increasing number of cities face liveability crises, evidenced by deteriorating air standards and water pollution. They are also highly vulnerable to natural disasters and climate change activities with poor and disadvantaged communities being more at risk.

“Our region has demonstrated, in a range of cities, how sound leadership, sustainability and financial capacity can catalyse the essential change that we need. We must address the power-sharing gaps between local and central government; the financing gaps in local government budgets and investment; and the capacity gaps of local governments in promoting strategic and future-oriented urban planning,” said Ms. Akhtar.

“The need for strong leadership and political commitment, both at the national and subnational levels, to gear up responses, learn and adapt from the region’s successful stories of urban transformations, and deploy innovation and newer technologies, strengthening local governance institutions and working more closely with private sector to manage urbanization,” said Ms. Akhtar.

♦ Receive daily updates directly in your inbox - Subscribe here to a topic.
♦ Download the UN News app for your iOS or Android devices.
cities 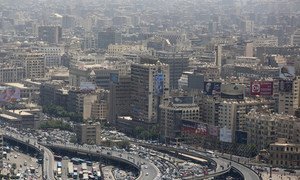 The way cities are planned, run and managed is crucial for development – UN deputy chief

In his address to the World Cities Summit in New York today, United Nations Deputy Secretary-General Jan Eliasson called on global leaders to adapt to the demographic and cultural shift that is taking place in cities worldwide in order to make them economically viable, environmentally sustainable and socially vibrant.