Rick Bajornas
Secretary-General Ban Ki-moon meets with the President of Slovakia, Andrej Kiska, during a visit to the country on 18 October 2015. UN
19 October 2015

“I am honoured and pleased to visit this historic city of Levoca, and I’d like to thank you for all your efforts to preserve this historical culture and heritage, and civilization and proud history of your country,” Secretary-General Ban Ki-moon told reporters at the town’s City Hall.

“That is why UNESCO [UN Educational, Scientific and Cultural Organization] has designated this historic city, Levoca, as world cultural heritage site,” he added.

The UN chief said he was “deeply impressed” while entering the city due to the many historical buildings, properties and assets.

“These may belong to your citizens and city but I believe that these are common heritage of humanity,” he continued. “Therefore, it would be very important to preserve all these cultural heritage and assets, and your proud history.”

During his brief visit to Levoca, Mr. Ban also noted that he was “very much inspired by such a stunning beauty and history,” and said he hopes the many people who visit will also be inspired.

“Taking this opportunity I'd like to stress the importance of the role of the local community, particularly mayors and governors, and the importance of living harmoniously and in a sustainable way,” he declared, recalling that three weeks ago, the Foreign Minister of Slovakia, Miroslav Lajčák, with whom he met with on Sunday, came to the United Nations and adopted the Sustainable Development Goals (SDGs) alongside all world leaders.

These goals are part of the 2030 Agenda for Sustainable Development, which aims to wipe out poverty, fight inequality and tackle climate change over the next 15 years.

“Let's work together to make this world and your country better for all,” the Secretary-General concluded.

♦ Receive daily updates directly in your inbox - Subscribe here to a topic.
♦ Download the UN News app for your iOS or Android devices.
Slovakia 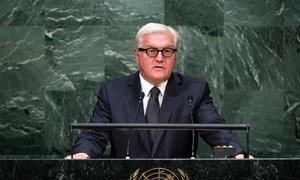 Several European leaders took to the podium today at the UN General Assembly’s annual debate, highlighting that the world is again living in restless times, especially in light of the unprecedented scale of humanitarian crises, including the migrant and refugee crisis.