Jean-Marc Ferré
A general view of the Human Rights Council in session.
16 October 2015

Belgium needs to develop an inclusive national vision and action on the issue of foreign fighters at federal, regional and local levels, the United Nations Working Group on the use of mercenaries said today following a five-day visit to the European nation.

“The threat to the country is otherwise significant,” warned the expert group, which is mandated by the UN Human Rights Council to study and identify emerging issues and trends regarding mercenaries, in a news release.

“The number of Belgian foreign fighters is reportedly the highest in Europe per capita among those travelling to join conflicts abroad such as in Syria and Iraq,” said human rights expert Elzbieta Karska, who currently heads the group.

“The need to tackle this problem through robust collective efforts which engages all sectors of Belgian society is critical in finding solutions to this phenomenon,” she added.

Ms. Karska and fellow expert Patricia Arias were in Belgium from 12 to 16 October to gather information on the activities of foreign fighters going from the country to conflict zones abroad, as part of a comprehensive study on foreign fighters and their impact on human rights, including on possible links to 'mercenarism.'

During their visit, the experts received information that there are some 207 Belgians in Syria, 77 casualties, 128 returnees, and 62 persons who failed to get to Iraq or have been brought back. Of these, 46 foreign fighters have been prosecuted, all associated with the group Sharia4Belgium.

Recruitment is reportedly through extensive informal networks of friends and family, and through social media, with contacts in Syria paid on the basis of the number of persons they recruit and whether the recruits subsequently marry. This follows previous waves in 2010, related to Sharia4Belgium, and in 2012, through peer recruitment.

“The profiles of foreign fighters are varied, with an average age around 23 years and decreasing,” Ms. Karska noted. “Women are also increasingly leaving.”

“Motivational factors are diverse, and, to some degree, individualized,” she explained. Among the motivations identified are religious convictions, humanitarian reasons, the need for a sense of belonging and acceptance, the search for a livelihood, escaping a criminal background, and adventure.

“Clear profiles of foreign fighters are thus not possible to identify,” the expert stressed.

The Working Group's delegation also welcomed a number of initiatives that have been undertaken to deal with issues relating to the foreign fighter phenomenon.

“These initiatives are timely and imperative in ensuring that this problem is at the forefront of its national priorities and that the discourse resonates throughout Belgian society,” Ms. Karska said. “This same, very elaborate, system must also serve to bring together all the actors in a more collaborative, effective way for a sustained solution.”

The Working Group recommended strengthening the national vision and strategic plan, to be fully integrated, with the broadest possible participation, and informed by multi-disciplinary in-depth research and analysis. Roles must be clear and programmes fully resourced, with a focus on preventive over punitive measures.

The experts also urged the Government of Belgium to adopt a human rights based approach, with particular attention paid to the inclusion of especially affected communities. During the visit, the delegation met with stakeholders from the government, academics and representatives of civil society organizations including families of persons who have travelled to join conflicts abroad.

The expert group will present their first report on the issue of foreign fighters to the UN General Assembly on 2 November, which will include facts gathered during country visits, and the information shared by UN Member States and other actors.

The Working Group will also present a comprehensive report on its visit to Belgium to the Human Rights Council in 2016. 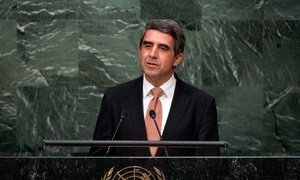 European leaders took to the podium of the United Nations General Assembly today to call for a global response to terrorism, both by combatting it and taking early action to pre-empt the scourge, which has seen hundreds of thousands of refugees flooding to the continent’s doorstep.