Yemen’s spiralling crisis has caused “alarming malnutrition levels” among children because of the limited availability of and lack of access to food due to blocked or damaged delivery routes and restrictions on food and fuel imports caused by the conflict, the United Nations Children’s Fund (UNICEF) warned today.

Despite the challenging circumstances to delivery aid, “about 3.8 million children have received food supplements, and 933,000 pregnant and lactating women benefited from supplementary feeding,” according to UNICEF.

But UNICEF estimates that 537,000 children, or one out of eight children under age five, are now at risk of severe acute malnutrition in Yemen – a threefold increase from 160,000 in March when a long and complex political crisis in Yemen rapidly escalated into all-out conflict.

As the fighting has spread across the country, millions of civilians are suffering from the violence.

UNICEF also noted that “almost 1.3 million children under five are moderately malnourished compared with 690,000 children prior to the crisis.”

“Yemen’s alarming malnutrition levels are aggravated by the limited availability of, and lack of access to food, due to blocked or damaged delivery routes and restrictions on food and fuel imports,” UNICEF said, adding that fuel and water prices have surged and availability remains erratic.

Yemen is the worst country for civilian deaths and injuries from explosive weapon use in the first seven months of 2015, according to a recent UN humanitarian report produced by the UN Office for the Coordination of Humanitarian Affairs (OCHA) and the charity Action on Armed Violence (AOAV). 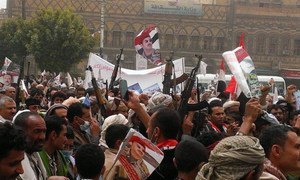