On Handwashing Day, UNICEF warns inadequate hygiene endangers key development goalMore than 40 per cent of health facilities have no water resources within 500 metres in sub-Saharan Africa where the practice of handwashing with soap is dangerously low even though it is “one of the cheapest, simplest, most effective health interventions,” the UN Children's Fund (UNICEF) said today.

More than 40 per cent of health facilities have no water resources within 500 metres in sub-Saharan Africa where the practice of handwashing with soap is dangerously low even though it is “one of the cheapest, simplest, most effective health interventions,” the UN Children's Fund (UNICEF) said today.

“Along with drinking water and access to toilets, hygiene – particularly handwashing with soap – is the essential third leg of the stool holding up the [Sustainable Development] Goal on water and sanitation,” said Sanjay Wijesekera, global head of UNICEF’s water, sanitation and hygiene programmes, in a press release.

The eighth Global Handwashing Day, marked annually on 15 October, comes less than a month after all 193 Member States of the United Nations adopted the Sustainable Development Goals (SDGs), which includes the target of achieving access to adequate and equitable sanitation and hygiene by 2030. UNICEF pointed out that it's the first time hygiene is included in the global agenda.

“From birth – when unwashed hands of birth attendants can transmit dangerous pathogens – right through babyhood, school and beyond, handwashing is crucial for a child’s health,” Mr. Wijesekera said.” It is one of the cheapest, simplest, most effective health interventions we have.”

Sub-Saharan Africa, the region with the highest child mortality rates globally, has particularly low levels of handwashing. According to UNICEF and the UN World Health Organization (WHO), levels are at best 50 per cent in 38 countries in the region.

Even health care facilities often lack places for handwashing: “Some 42 per cent of them in WHO’s Africa Region have no water source available within 500 metres,” the UNICEF press release underlines.

In addition, UNICEF says improvements in hygiene must supplement access to water and sanitation, or children will continue to fall victim to easily preventable diseases like diarrhoea.

To mark the international day, activities are being organized around the world which aim to teach the importance of handwashing with soap especially to children.

♦ Receive daily updates directly in your inbox - Subscribe here to a topic.
♦ Download the UN News app for your iOS or Android devices.
hygiene

UN stresses effectiveness of handwashing with soap to prevent diseases 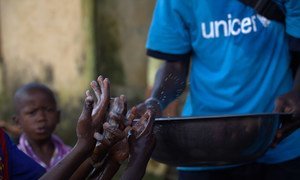 On World Day, UN spotlights handwashing as vital tool in fight against Ebola