The World Food Programme (WFP) announced today that aid workers have reached more than 30,000 newly displaced people in desperate need of food in the Central African Republic’s capital, Bangui, where the situation remains “tense and volatile” after a new surge in violence.

“It is critical that WFP has the necessary resources to come to the aid of people who are most vulnerable and have been repeatedly affected by a crisis that erupted two years ago,” said Bienvenu Djossa, WFP Country Director in the Central African Republic (CAR).

According to WFP, nearly 900,000 people are still displaced or have taken refuge in neighbouring countries since the start of the conflict in 2013 and the agency and its partners aim to assist 1.2 million people in areas worst-affected by conflict and hunger.

The agency urgently requires $21 million to continue providing vital assistance to families in need through to the end of the year.

“More than 40,000 people have been forced to flee their homes in a matter of days,” according to Mr. Djossa.

“The situation remains tense and volatile, but WFP has been able to reach over the past week those most in need, people who have been cut off from any assistance for days, and living in difficult circumstances in over 20 displacement sites,” Mr. Djossa said.

He went on to say that even before this latest escalation in violence, “about one in four people were in need of urgent food assistance, and were struggling to recover from the widespread disruption the conflict caused to their lives.” 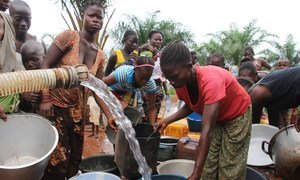 Despite worsening security conditions and the recent looting of international aid offices in the Central African Republic (CAR), prompting the temporarily relocation of 200 personnel, the United Nations today pledged to keep bringing aid into the war-torn country, where over half the population urgently needs assistance.