Director-General of the Food and Agriculture Organization of the United Nations (FAO) José Graziano da Silva and French Minister for Agriculture, Stéphane Le Foll, warned that failure to do so would unravel recent progress made in combating world hunger.

Mr. da Silva and Mr. Le Foll made their appeals at a CFS side event. The CFS is an intergovernmental body that serves as a forum for the review of food security and nutrition policies.

Both Mr. Da Silva and Mr. Le Foll urged countries to reach an agreement on how to combat climate change ahead of the upcoming UN conference in Paris, known informally as COP 21, where global leaders and international organizations will meet to reach consensus on a historic climate change accord.

The FAO Director-General hailed the international community’s recent adoption of the 2030 Agenda for Sustainable Development, which includes the eradication of hunger and extreme poverty. He emphasized that, in order to achieve these goals, agriculture and food systems that are more productive and adapted to climate change are needed.

“We can end extreme poverty and hunger by 2030,” said Mr. Da Silva. “We know what works and we have the tools for it, but we know climate change threatens to derail our efforts. It is already impacting on food security and making hunger eradication even more difficult.”

“We believe that agriculture in the broad sense – including forestry, fisheries and aquaculture – can and must play a central role in addressing climate change, particularly in adapting its impacts, such as water scarcity, soil salinity or increasing pests and diseases of plants and animals,” he added.

Mr. Le Foll cautioned that everyone on the planet would bear the consequences “if the world’s leaders cannot find agreement on tangible and concrete objectives” to curb global warming.

Noting that agriculture is often viewed as a problem due to its role in greenhouse-gas emissions, Mr. Le Foll called for the need to make progress with techniques that “allow us to be more economical and consume less energy.”

Mr. da Silva said that the world’s poorest and most vulnerable are the hardest hit by the droughts and floods caused by global warming. He also noted the additional challenges faced by family farmers, fishermen and community foresters, who were both highly dependent on the world’s natural resources and also the first to suffer due to climate-related shocks: “they are the least responsible for climate change and cannot be expected to bear the costs of adaption to climate change,” he said.

He called for policies and investments to adapt agriculture to climate change, including reducing deforestation and overfishing, improving soil fertility and achieving lower emissions.

♦ Receive daily updates directly in your inbox - Subscribe here to a topic.
♦ Download the UN News app for your iOS or Android devices.
FAO|climate 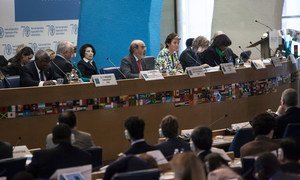