OSCE/Evgeniy Maloletka
Members of the Organization for Security and Cooperation in Europe (OSCE) Special Monitoring Mission to Ukraine examine the MH17 crash site in July 2014.
13 October 2015

Known as an “accident investigation Final Report,” the document summarizes findings and provides recommendations on the technical investigation conducted under the international requirements established by the Convention on International Civil Aviation, also known as the Chicago Convention.

It concluded that the Boeing was “shot down over the eastern part of Ukraine, where an armed conflict broke out in April 2014,” killing all 298 people on board.

“ICAO and its Member States responded rapidly in the aftermath of MH17 to address some important immediate concerns,” said ICAO’s Council President, Dr. Olumuyiwa Benard Aliu, in a press release.

“Now that the Dutch Safety Board has issued its Final Report, ICAO will be reviewing its recommendations applicable to our Organization and responding as needed to ensure that air transport continues to be the safest way to travel,” he continued, noting that investigations under Annex 13 of the Chicago Convention are “directly related to improving flight safety, and not to the apportioning of liability or blame.”

The press release also highlighted that in the weeks immediately following the MH17 “tragedy,” ICAO quickly established a special Task Force on risks to civil aviation arising from conflict zones. The Task Force recommended that ICAO should establish an online repository where States could share their conflict zone information more effectively, and where the public could also access it. ICAO launched the new online tool in April of this year.

Immediately after the accident, ICAO says its investigation specialists began assisting and providing technical Annex 13 consultations to the MH17 investigation, at the request of the States which instituted it. This reportedly included advice on the formal handover of investigation authority from Ukraine to the Netherlands.

“Any fatality is one too many in civil aviation,” stressed President Aliu. “Our sector is constantly improving its safety performance through a wide range of collaborative global measures relating to data sharing and the strategic prioritization of flight safety risks, and accident investigation Final Reports play a very valuable part in that process.”

Meanwhile, the UN Secretary-General also welcomed the release of the final report, noting that it is in line with Security Council resolution 2166 (2014), which demands accountability, full access to the site of the crash, and a halt to military activities.

“The United Nations has from the very beginning fully supported and shared in the determination of the international community to ‘seek the truth about what happened,’” said Mr. Ban’s spokesperson.

The Secretary-General also once again paid tribute to the innocent victims who lost their lives on that “tragic day,” and said he shares in the need for full accountability, underlining that anyone found to be responsible must be brought to justice. 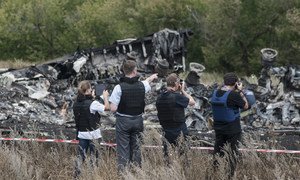 The United Nations Security Council was unable to adopt a new resolution today following Russia’s negative vote on a measure that would have established an international tribunal to prosecute persons responsible for the downing of Malaysia Airlines flight MH17, which crashed on 17 July 2014 in Donetsk Oblast, Ukraine.