Only a parallel, all-inclusive transformative political process that is compliant within the framework of the Geneva Communiqué, can lead to a resolution of the ongoing crisis and Syria and tackle terrorism in the region, the United Nations Special Envoy for the country said today.

“Fighting terrorist organizations listed by the Security Council resolutions is a priority, it is also true that winning […] against terrorism can only be achieved through a parallel […] all-inclusive transformative political process within the framework of the Geneva Communiqué. [Trying to resolve the crisis with] only weapons [is] not going to be enough,” Staffan de Mistura told a press conference in Geneva.

“Let us remember that most of the refugees left Syria well before ISIS [also referred to as Da’esh or the Islamic State of Iraq and the Levant, ISIL] took over almost one-third of the country. In fact, they left because of the fighting between the Government and what was at that time called the mainstream opposition,” he added.

Mr. de Mistura further said that the recent Russian military intervention in Syria has introduced a “new dynamics” to the situation. He noted that he will be travelling to Moscow tonight to discuss matters further.

He also recalled proposals made by UN Secretary-General Ban Ki-moon and himself about introducing working groups and contact groups to resolve the crisis, saying “there is no sustainable military solution in sight, and I believe…this is known by all, including Russians, Americans, the Syrian Government and the regional players.”

Despite the earlier approval of his proposals by the UN Security Council, Mr. de Mistura said that on Sunday, the opposition groups decided for the time being to not be a part of the working group, “mainly due to current Russian military activities and some doubts on the outcome of the working groups.”

“I regret and however respect their decision and hope it can evolve,” said Mr. de Mistura. “Our job is to mediate. Our job is also to look for any opportunity […] to reduce suffering and increase the chances to have some serious discussions around the table,” he further noted.

In the meantime, he suggested that there is an urgent need to avoid the acceleration of militarization of the conflict.

He called for ceasing military activities by both Syrian and Russian authorities in areas surrounding Zabadani, Kefraya and Fua in order to provide humanitarian assistance and to carry out evacuation procedures.

He added that an additional 40,000 displaced Syrians are now moving out of the country in fear of the recent acceleration in military activities, further stressing on scaling back military intervention.

Several rounds of UN-mediated talks in Geneva among the parties have ended without a settlement and the Organization has since been reiterating the need to press ahead with political negotiations to achieve the aims of the Geneva Communiqué.

That document, adopted after the first international meeting on the issue on 30 June 2012, and since endorsed by the UN Security Council, lays out key steps in a process to end the violence. Among others, it calls for the establishment of a transitional governing body, with full executive powers and made up by members of the present Government and the opposition and other groups, as part of agreed principles and guidelines for a Syrian-led political transition. 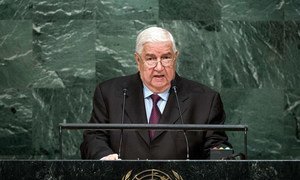 With his homeland awash in the blood of its people, who were making a valiant stand against terrorism, Syria’s Foreign Minister criticized world leaders at the United Nations today for taking only half-hearted steps to end the crisis in his country and for providing haphazard support to Syria’s fight against extremism until the scourge began spreading to Europe.