UN Photo/Cia Pak
A wide view of the meeting of the General Assembly’s Fifth Committee to consider the UN Proposed Programme Budget for 2016-2017. Secretary-General Ban Ki-moon (shown on screens) proposed a budget level of $5.57 billion for that biennium.
12 October 2015

Introducing his proposed $5.5 billion budget for the work of the United Nations over the next two years, UN Secretary-General Ban Ki-moon said today that it encompasses the Organization’s “vision and commitment to budget discipline and strict financial management.”

“My proposals for the 2016-2017 programme budget are built on our progress,” Mr. Ban told delegates in the UN General Assembly’s Fifth Committee, which focuses on administrative and budgetary issues.

“In formulating the proposal before you, I continued to challenge my senior managers to find new and better ways of delivering mandates more effectively and efficiently. I urged them to rethink our business practices and embrace innovative synergies,” he added.

The UN chief explained that he had presented a budget outline level of $5.74 billion dollars to the General Assembly, which then invited him to prepare the proposed budget on the basis of a preliminary estimate of $5.56 billion.

“I am now proposing a budget level of $5.57 billion, before recosting,” he announced. “This is 1.6 per cent – or $90.8 million – below the appropriation for the current biennium, and is $10.2 million – or 0.2 per cent – above the budget outline figure set by the General Assembly.”

Mr. Ban explained that the increase of 0.2 per cent over the budget outline figure is mainly due to adjustments in light of recent General Assembly decisions on a new administrative online platform, called Umoja, which is currently been rolled out.

He also indicated that the proposal reflects a net decrease of 56 posts [job positions] compared to the current budget, primarily related to the “freezing of posts.”

The Secretary-General further underlined that with UN Member States adopting the Addis Ababa Action Agenda last July and the landmark 2030 Agenda for Sustainable Development in September, in addition to commitments made to achieve a universal climate agreement in Paris in December, some costs haven’t been taken into account.

“My budget proposals do not yet reflect any possible financial implications required for the Organization to support Member States in achieving these goals,” Mr. Ban explained. “We are working towards the most appropriate implementation framework for the UN system and the Secretariat. As we assess financial implications arising from this framework, I will present any cost estimates to the Assembly.”

He recalled that with the end of his 10 year tenure as Secretary-General, half the executions for the budget period will have to be carried by his successor.

“I have felt a sense of responsibility to make sure that my successor, whoever it may be, will be able to carry out his or her duties smoothly and with sufficient resources,” he said. “That is my commitment, and that spirt is reflected in this programme budget.”

In conclusion, he called for collaboration to ensure that the United Nations “makes the best possible use of our resources in the service of humanity.”

♦ Receive daily updates directly in your inbox - Subscribe here to a topic.
♦ Download the UN News app for your iOS or Android devices.
Budget 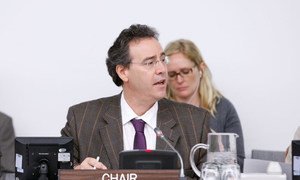