UN Women Executive Director Phumzile Mlambo-Ngcuka and Ms. Radhika Coomaraswamy, the lead author of the global study, introduced it at a press conference at UN Headquarters.

“Since 2000, when resolution 1325 was adopted, the UN has recognized that women’s leadership and equality are key to international peace and security,” said Ms. Mlambo-Ngcuka.

“This is now an accepted global norm,” she added, while noting that it had been “reiterated as many times as it has been ignored in practice.”

Introducing the new study, Ms. Mlambo-Ngcuka said that it represented the most up-to-date and comprehensive compilation of all the evidence that “women’s empowerment contributes to the success of peace talks,” as well accelerates economic recovery after conflict and counters violent extremism.

She also noted that, in recent years, the positive impact of women’s participation had been seen in Colombia and the Philippines, but that “these cases are still outliers rather than the norm.”

In the 15 years since the adoption of resolution 1325, she said, “progress remains far too slow,” with only 2 per cent of aid to peace and security interventions in fragile States targeting gender inequality, while just three per cent of military peacekeepers are women. In conflict-affected settings, violence against women and girls is higher, as is child marriage, while girls’ school enrolment and access to property falls.

She also commended the scope of the study, which, she said had incorporated submissions from civil society, member states, regional and international organizations, as well as country visits undertaken by the author.

Ms. Mlambo-Ngcuka also referred to the UN Security Council meeting tomorrow on women, peace and security to mark the 15th anniversary of the resolution, noting this as an opportunity for the “positive stepping up of women’s empowerment and gender equality.”

In her concluding remarks, she said that evidence shows that when women are at the peace tables, their participation brings a higher rate of peace agreement, adding that “squandering the potential dividends has never been more costly.”

Ms. Coomaraswamy, the lead author of the report, underscored the importance of its independence, for which she thanked the Secretary-General, noting that there are areas not completely in line with the United Nations position on some of the issues contained within it.

She cited the report’s focus on prevention, the nature of early warning systems, armed and unarmed presences, and the need for dialogue.

“Levels of military spending are high and the cycle of escalation must stop,” she noted, adding that force should only be used as a last resort; when dialogue is impossible.

She also said that the study proves “beyond any doubt” that women’s “participation in peace processes sustains [those] processes for a much longer time” than efforts that exclude them.

Ms. Coomaraswamy also stressed the importance of looking at peacekeeping at the local level, because “not one size fits all.”

“You have to understand what the society needs and the peacebuilding program should be mapped for that particular area,” she said.

She also noted that the report contained detailed recommendations for the Security Council, which will be debated tomorrow. One such recommendation was the need for an expert level group that would help the Council deal with issues through a “gender lens,” as well as a proposed change to funding, with some earmarking for projects affecting women. It also calls for an Assistant-Secretary-General at UN Women to work in the area of women, peace, and security. 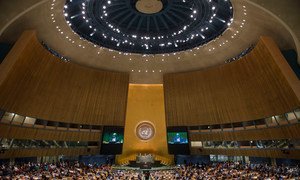 As part of the commemoration of the 70th anniversary of the United Nations, the General Assembly today began a two-day debate to draw lessons from the experiences of the past seven decades in the area of peace and security and take stock of present challenges.