UNRWA
Two infants at the UNRWA medical point in Yalda, set up to provide vital healthcare to civilians displaced from Yarmouk and host communities.
12 October 2015

Twenty-two Member States of the United Nations are planning to pledge $100 million dollars to support next year’s budget of the UN Relief and Works Agency for Palestine Refugees in the Near East (UNRWA) which provides educational, health, relief and social services for some five million such refugees in Jordan, Lebanon, Syria, the West Bank and Gaza.

Donors made their pledges last week during a meeting of the Ad Hoc Committee for voluntary contributions, created by the UN General Assembly as the main forum to announce support for the 65-year-old agency.

“Against the backdrop of unrest in the Middle East, the devastation caused by the Syria conflict, the recent clashes in Jerusalem and the West Bank, the slow pace of the Gaza reconstruction, and the waves of refugees leaving the region to find shelter in Europe, it is time to change the paradigm: UNRWA and the rest of the UN needs be strengthened and not weakened,” said Mogens Lykketoft, President of the UN General Assembly, in his opening statement.

Pledges were committed by Sweden, Italy, Luxembourg, Turkey, Argentina, the Czech Republic, Austria, Belgium, Switzerland, the United Arab Emirates, and the Republic of Korea. Several more countries indicated their contributions would be forthcoming or are pending approval by the respective national parliaments.

According to UNRWA, $100 million dollars would cover a part of the basic needs of the Agency to ensure the uninterrupted delivery of essential services. Provided these pledges and other expected contributions materialise, and thanks to strict internal control measures, UNRWA expects to face a deficit of $81 million dollars, lower than previous years.

“UNRWA is emerging from a financial crisis that was unprecedented in its severity and the pain it caused our beneficiaries,” said the Agency’s Deputy Commissioner-General, Sandra Mitchell, in her statement. Ms. Mitchell commended the tremendous effort and support from partners, including donors and host governments, thanks to which sufficient funds to address the $101 million funding shortfall had been secured. In July, UNRWA warned that the funding crisis may force it to delay schools opening and limit essential services such as primary health care.

“Without education and its sense of dignity and hope for a better life, people would have nothing else to turn to, and many undertook the perilous journey to Europe and elsewhere,” she stressed.

In addition, she outlined the increasingly grave operational context in which UNRWA works and which makes the need for its services all the greater.

“The civil war in Syria persisted with relentless barbarity; in Gaza, the blockade continued to affect every aspect of the population’s lives and restricted UNRWA’s work; in the West Bank, including East Jerusalem, escalating violence and the denial of rights and dignity under an increasingly restrictive and destructive occupation regime remained a powerful driver behind the need for UNRWA services,” she stated.

“And in Lebanon, in addition to the established community highly reliant on UNRWA, some 45,000 Palestine refugees from Syria were in desperate need of its assistance which continued to decline in the face of financial scarcity.”

Furthermore, Ms. Mitchell underlined the vital role played by hosts of Palestine refugees, a point which UNRWA notes was reiterated by a significant number of UN Member States present at the meeting.

Concluding her remarks, Ms. Mitchell underlined that until a just and lasting solution is found to the plight of Palestine refugees, donors have to remain committed to ensuring that UNRWA can deliver vital services to Palestinians. 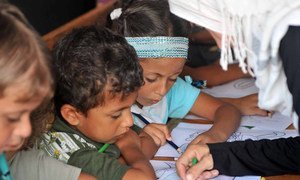 Facing its most severe financial crisis ever, the United Nations agency tasked with assisting Palestine refugees throughout the Middle East has today convened an emergency session to weigh the growing risk that it may be forced to delay the start of the academic year in some 700 schools for half a million students across the region.