The United Nations in Zimbabwe has appealed to humanitarian and development partners for $86 million that is critically needed to fill a shortfall to support 1.5 million people affected by food insecurity in the country.

“The food security response plan, developed through a consultative process, requests $132 million, with $46 million so far pledged leaving a shortfall of $86 million to support 1.5 million people affected by food insecurity in 52 districts,” said Bishow Parajuli, UN Resident Coordinator in Zimbabwe, in a statement during a high level consultative meeting this past Friday of senior government representatives, UN agencies and development partners in the capital, Harare.

The request followed a recent call by Vice President Emerson Mnangagwa, chairman of the Cabinet Committee on Food and Nutrition Security, to partners for support.

The response plan, which covers various sectors, has a gap of $41 million in food assistance; $32 million in agriculture and livelihoods; $5 million in nutrition; $5 million in protection and social safety nets; and $3 million in water, sanitation and hygiene to assist the most vulnerable populations in the country.

Supported by the Government, UN, non-governmental organizations and donors, the 2015 Zimbabwe Vulnerability Assessment Committee reported that food insecurity was the result of agricultural production loss – due mainly to prolonged dry spells in the southern and south-eastern parts and poor rainfall distribution patterns both in space and time across the country.

With logistical support from the World Food Programme (WFP), the Zimbabwe Government has urgently provided 30,000 MT of cereals.

On behalf of the European Union (EU) Ambassador to Zimbabwe, Paula Vazquez Horyaans recognized that vast areas of Zimbabwe affected by structural food insecurity were aggravated by the effects of climate change and El Niño. She confirmed that the implementation of an EU-supported national resilience framework would help create a resilient nation – one capable of protecting development gains against shocks and stresses and supporting inclusive economic growth – and stressed the importance of a coordinated approach to emergency responses for strengthened medium- and long-term resilience coping mechanisms.

Reiterating the dire food security situation and looming El Nino effect on the next season, the UN Resident Coordinator called for concerted and pro-active action to address immediate needs and invest in national resilience-building efforts.

The UN agencies participating in the response to the food insecurity are the Food and Agriculture Organization (FAO), the UN Children's Fund (UNICEF), WFP and World Health Organization (WHO).

♦ Receive daily updates directly in your inbox - Subscribe here to a topic.
♦ Download the UN News app for your iOS or Android devices.
Zimbabwe 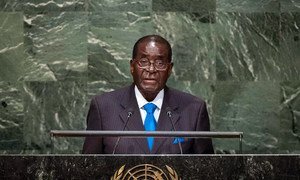 Addressing the General Assembly today, President of Zimbabwe Robert Mugabe condemned sanctions against his country imposed by the European Union and the United States and called for broad scale reform of the United Nations and its institutions.