United Nations Secretary-General Ban Ki-moon, speaking in Bolivia at the Peoples World Conference on Climate Change and the Defence of Life, said that the subject of the conference was both “important and timely.”

“Climate change and the defence of life on Earth are at the top of the international agenda this year,” said Mr. Ban, noting the recent adoption by world leaders of the 2030 Agenda for Sustainable Development and the upcoming climate change conference in Paris.

The 2030 Agenda, he continued, should leave no one behind, especially women, adding that Sunday was Women's Day in Bolivia, the birthday of the country's best-known poet, Adela Zamudio.

“She rose above society's constraints to become a leader for women's emancipation,” said Mr. Ban. “I urge all women -- and men – to be inspired by her example. We cannot achieve equitable sustainable development if we do not involve and respect half the world's population.”

Mr. Ban noted that Bolivia was one of “the few countries in the world with as many women as men in its Parliament” and that guaranteeing women's participation in all levels of decision-making “is crucial not just for gender equality, but for inclusive democracy and sustainable development.”

The Secretary-General then turned his remarks to Bolivia's advocacy for the rights of indigenous peoples. Indigenous peoples globally, he said, “are among the world's most vulnerable and marginalized people.”

“Yet their history, traditions, languages and knowledge are part of the very bedrock of human heritage,” he continued. “There is much to be learnt from indigenous peoples as we seek to find solutions to the challenges of combatting climate change and managing Mother Earth's resources in a sustainable way.”

Mr. Ban added that, in many nations, “the poverty gap between indigenous and non-indigenous groups is increasing,” and that was unacceptable. “As we implement the 2030 Agenda for Sustainable Development, we must do so in culturally appropriate ways that meet the needs of indigenous peoples and their conceptions of well-being."

He then commended the Government of Bolivia and President Evo Morales for introducing International Mother Earth Day to the United Nations General Assembly in 2009.

Bolivia, he said, had also inspired the discussions on the 2030 Agenda for Sustainable Development with the principle of “vivir bien.”

The Secretary-General noted that, in his recent speech to the UN General Assembly, President Morales had explained the concept as “living in solidarity with people and in harmony with Mother Earth,” a reminder “that well-being is not only about material advantages, but social and spiritual well-being” and that “well-being cannot be achieved without respecting and protecting our planet.”

Mr. Ban said that those sentiments “were also recently and powerfully echoed by His Holiness Pope Francis” when he came to speak with world leaders on the day they adopted the 2030 Agenda.

“His recent Encyclical highlights the direct link between caring for the environment and caring for the world's poor and vulnerable,” said Mr. Ban. “Caring for Mother Earth is a moral issue. We must change how we use Mother Earth's resources, and live in a manner that is sustainable.”

This was especially true for the challenge of climate change, he said, noting that governments will be meeting in Paris in December to finalize an agreement on the issue.

“It must be ambitious,” he said, adding that “Climate change is upon us. Here in Cochabamba you know this well. Your mountain Tunari used to be capped with snow all year round. Nowadays, it has snow only a few weeks a year.”

“Droughts. Fires. Floods. Landslides. Glaciers melting. Oceans turning to acid. Mother Earth is giving us a warning. We must listen. And we must act.”

The climate change conference in Paris, he said, “must be a turning point in our collective effort to protect Mother Earth.”

He said that an agreement was needed that was durable and flexible, and must “send a clear signal that the transformation of the global economy in a low-carbon direction is inevitable, beneficial, and already under way.”

Developed countries, Mr. Ban continued, must provide a politically credible pathway for meeting their pledge of $100 billion dollars a year by 2020.

Noting that “a transformative deal in Paris” was in sight, Mr. Ban closed his remarks by asking world leaders to take a pledge to “not steal from our planet” but to “manage its resources wisely.” 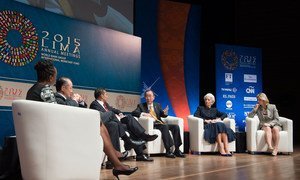 Secretary-General Ban Ki-moon highlighted the important role of the World Bank today in the implementation of the 2030 Agenda, noting it could “step up capacity building and the mobilization of resources for sustainable development by drawing on its rich technical expertise.”