UN Photo/Eskinder Debebe
Secretary-General Ban Ki-moon delivers speech at Interactive Panel Discussion entitled "From Today to 2030". The event is part of the 2015 Annual Meetings of the Boards of Governors of the World Bank Group (WB) and the International Monetary Fund (IMF) in Lima, Peru.

10 October 2015
Secretary-General Ban Ki-moon highlighted the important role of the World Bank today in the implementation of the 2030 Agenda, noting it could “step up capacity building and the mobilization of resources for sustainable development by drawing on its rich technical expertise.”

Secretary-General Ban Ki-moon highlighted the important role of the World Bank today in the implementation of the adopted 2030 Agenda, noting that it could “step up capacity building and the mobilization of resources for sustainable development by drawing on its rich technical expertise.”

Mr. Ban is currently in Lima, Peru to participate in the 2015 Annual Meetings of the Boards of Governors of the World Bank Group and International Monetary Fund.

In his remarks at the Development Committee meeting of the World Bank Group, he noted the importance of the 2030 Agenda, emphasizing that it addressed the “structural factors that have hindered poverty eradication, inclusive growth and sustainable development.”

He also highlighted the importance of the Sustainable Development Goals(SDGs), the Agenda's Means of Implementation mechanisms, the Addis Ababa Action Agenda on Financing for Development and the upcoming climate change conference in Paris.

The World Bank, said the Secretary-General, “has an important role in economic empowerment, sustainable agriculture and infrastructure, the fight against hunger, combating climate change, building resilience, and promoting effective governance and the rule of law.”

“I count on the World Bank to encourage other multilateral and regional financial institutions and development banks to incorporate the SDGs into their programmes and work,” he added.

The Secretary-General also noted that all the SDGs must be pursued together and that, more than ever, “the World Bank, the United Nations and the world's international and regional institutions must work hand in hand.”

“At the global level, we have put in place inter-agency teams around several important issues, notably the follow-up to Addis," he continued, highlighting that it was “essential that the World Bank Group participates in the mechanisms for follow-up and review of the Addis Ababa Action Agenda and the 2030 Agenda for Sustainable Development.”

He also encouraged the World Bank to join him at the inaugural Economic and Social Council (ECOSOC) Forum on Financing for Development, and added that 2016 will see the first full session of the UN High-Level Political Forum on sustainable development, a forum where national, regional and thematic reviews of the 2030 Agenda will join together, and that the World Bank will engage in supporting the Forum's work.

Mr. Ban also met with Mr. Jim Yong Kim, President of the World Bank Group. The two leaders exchanged views on a wide range of issues including small states, gender equality and water and sanitation, and agreed to work closely on the SDGs.

The Secretary-General also attended an international stakeholders' roundtable meeting for the Middle East and North Africa region and a Development Committee Ministerial event on “investing in evidence.”

Everyone is entitled to a life of dignity, Ban says on World Mental Health Day 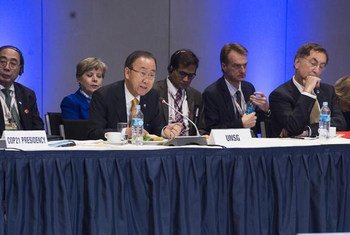 9 October 2015
Stressing that financial resources are central to meeting the goals of the transformative 2030 Agenda for Sustainable Development Agenda, United Nations Secretary-General Ban Ki-moon today said that in order to create a low-carbon, climate-resilient future that benefits everybody, allocating appropriate finance is of key importance.