In the wake of last week’s meeting of world leaders at United Nations Headquarters on countering violent extremism, a new UN report released today throws into stark relief the growing threat posed by foreign terrorist fighters, especially in an era where extremist groups freely use social media and the Internet to disseminate their ideologies and even raise funds.

The report, released by the UN Security Council’s Counter-Terrorism Committee and its Executive Directorate (CTED), stressed that foreign terrorist fighters constitute a significant and evolving threat, and that groups such as the Islamic State of Iraq and the Levant (ISIL) act in a quick and adaptable manner.

“With some 30,000 foreign terrorist fighters coming from over 100 countries, terrorism is a global threat, which requires a global response,” said Jean-Paul Laborde, Assistant Secretary-General of CTED in a statement.

“Attempts to resolve these issues effectively through a purely domestic approach will not work,” he continued. “Together, we need to urgently step up our efforts and reinforce our preventive capacity across the board – in a flexible and immediate way.”

Most States, he added, have also developed the capacity to monitor Internet sites, including social media, to combat online incitement to commit acts of terrorism.

Despite these measures, “it is still easy for anybody wishing to join a terrorist organization or to travel to a conflict zone to make direct, anonymous contact with a terrorist recruiter,” Mr. Laborde warned.

As the report outlines, one way to combat this is the use of the advance passenger information (API) system, which enhances border and aviation security and enables States to detect the arrival and departure of potential foreign terrorist fighters.

Currently, despite the adoption of a Security Council resolution on the subject, which requires airlines operating in Member State territories to provide API, only 51 States have the technology and only half of these states actually use it, said Mr. Laborde.

“International cooperation is not flexible enough, which is why the international community needs to make better use of already existing Security Council resolutions,” he said.

At a press conference at UN Headquarters on the launch of the report, Mr. Laborde echoed these themes, and also noted the importance of increasing the Organization’s work with regard to terrorist financing sources. He also added that more work needed to be done on the legal size, using tools such as e-Extradition.

“It is quite clear if we cannot sentence foreign terrorist fighters and people from ISIL, we will not show to the world that the international community works with efficiency against this phenomenon,” he said. 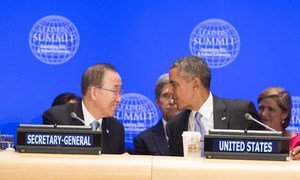 Addressing the growing threat posed by violent extremist groups such as the Islamic State of Iraq and the Levant (ISIL), also known as Da’esh, goes to the heart of the mission of the United Nations and requires a unified response, Secretary-General Ban Ki-moon stressed today at a high-level event held in New York.