The road towards peace and the implementation of an accord to end instability and violence in Mali is full of obstacles, the United Nations envoy for the country today told the Security Council, noting that these difficulties have been encountered sooner than he had expected.

“Violations of the ceasefire have limited progress in implementing the accord,” said Mongi Hamdi, Special Representative and head of the UN Multidimensional Integrated Stabilization Mission in Mali (MINUSMA), in his briefing to Council diplomats. “Precious time has been lost.”

The Agreement for Peace and Reconciliation in Mali was signed in June by the Coordination of Movements of Azawad (CMA), following its signature in May by the Government and a third party, the Platform coalition of armed groups.

The Malian Government has been seeking to restore stability and rebuild following a series of setbacks since early 2012, including a military coup d'état, renewed fighting between Government forces and Tuareg rebels, and the seizure of its northern territory by radical extremists. The country has also been wracked by a series of humanitarian crises.

Since his last briefing to the Security Council in late June, Mr. Hamdi said MINUSMA has directed political and military efforts to overcome challenges to the peace accord.

“First, military resources were directed to the protection of civilians in Kidal and Anefis,” he explained. “Second, an enhanced effort was undertaken to survey the movement of armed groups. Third, and most importantly, to address the violations of the ceasefire, which often lead to serious human rights and international humanitarian law violations, I used my good offices to persuade the parties to abide by their commitments and avoid an escalation of tensions.”

He noted that at the end of August, Malian President Ibrahim Boubacar Keïta called on the Platform armed coalition to withdraw from Anefis, a commune in the Kidal region in the north of Mali where fighting has been erupting.

“His determined efforts, added to those of MINUSMA and the rest of the international community, succeeded in persuading the Platform to eventually withdraw,” the envoy confirmed.

But when confrontation broke out near In-Khalil not far from the Algerian border at the beginning of September, Mr. Hamdi said MINUSMA was “deeply concerned” that this could lead to the end of the peace process.

“I called the leadership of CMA and Platform and met with them separately to address the situation,” he informed the 15-member Council, detailing what the parties agreed.

“First, to cease hostilities, including provocative troop deployments. Second, the in-principle return to their initial positions prior to the 20 June signature of the peace agreement. Third, a return to the peace process […]. Fourth, agreement on the circulation of people without arms. Lastly, there was a general agreement to continue dialogue among the communities and resolve problems peacefully.”

Mr. Hamdi stated that he is pleased to report that the ceasefire and the terms of these agreements are now holding – but other issues have arose over the past few months, such as criminals resorting to looting and banditry, which fosters insecurity and fear among the population while reducing faith in the peace process.

To contribute to a more secure environment, Mr. Hamdi announced that MINUSMA is seeking to deploy longer range unmanned aerial vehicles (UAVs), in hopes of freeing up troops previously dedicated to the protection of supply lines. He stressed that these moves would help the Mission to expand its presence in key areas of the north.

The envoy said he has also taken note of the recent decision of the Malian authorities to postpone local elections. “The postponement offers an opportunity to bring the electoral calendar in line with the terms outlined in the peace agreement,” he highlighted.

In conclusion, Mr. Hamdi underlined that “the process is back on track,” but that vigilance will be necessary. “It is my strong conviction that promoting the implementation of the agreement, through close support to the authorities, the CSA and its subsidiary bodies, provides the best opportunity for Mali to address its multiple challenges,” he stated. 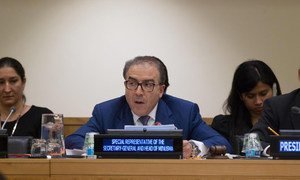 With all parties now signed onto Mali peace accord, world must back implementation – UN envoy

Welcoming the signature last Saturday by all parties to the conflict in Mali of the Accord for Peace and Reconciliation, the top United Nations envoy for the country today told the Security Council that now the implementation phase must start.