United Nations Secretary-General Ban Ki-moon has strongly condemned the attacks on Saturday in the Old City of Jerusalem, including the killing of two members of an Israeli family and injuries to Israelis and Palestinians in subsequent incidents in various Jerusalem neighborhoods.

Recalling the recent deadly attack on another Israeli family in the occupied West Bank, and in light of the wave of extremism and violence sweeping the region, the Secretary-General, according to a statement issued by his spokesperson, “is deeply concerned that these latest incidents signal a dangerous slide towards escalation.”

Further, the statement says that Mr. Ban is “deeply troubled” by statements from Palestinian militant groups, including Hamas, praising such heinous attacks. He urges all leaders to condemn violence and incitement, maintain calm and to do everything they can to avoid further escalation, said the UN chief's statement.

“The Secretary-General firmly believes that a just and lasting solution to the conflict can be achieved only through pursuing a negotiated two-state solution,” underscored the statement, adding that the United Nations stands ready to work with all parties to create the conditions on the ground, in the region and internationally to make meaningful negotiations possible.

Recent weeks have witnessed increasing tensions both in the West Bank and in East Jerusalem, prompting UN Secretary-General Ban Ki-moon, the Security Council and the High Commissioner for Human Rights to urge Israelis and Palestinians to defuse tensions and prevent any escalation of the current situation on the ground.

♦ Receive daily updates directly in your inbox - Subscribe here to a topic.
♦ Download the UN News app for your iOS or Android devices.
Jerusalem

UN calls on Israel to halt demolition of Palestinian homes

Jerusalem must be capital of both Israel and Palestine, Ban says 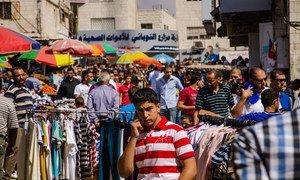 The United Nations Special Coordinator for the Middle East Peace Process has condemned a shooting attack that took place today on an Israeli civilian vehicle in the West Bank which resulted in the death of two people and injuries to their four children.