Senior United Nations officials today condemned what they called a “tragic” and “inexcusable” air strike on the Médecins sans Frontières (MSF) hospital in Kunduz, a city in northern Afghanistan, which resulted in the deaths and injuries of medical personnel, patients and other civilians.

In a statement issued by his spokesperson, Secretary-General Ban Ki moon strongly condemned the airstrikes in Kunduz early this morning that resulted in the death and injury of medical workers and patients at a the MSF hospital on 3 October.

“The Secretary-General recalls that hospitals and medical personnel are explicitly protected under international humanitarian law,” said the statement adding the Mr. Ban calls for a thorough and impartial investigation into the attack in order to ensure accountability.

Médecins Sans Frontières have been operating the only hospital in Kunduz under extremely trying conditions, the statement continued, noting that the UN chief commends the courageous and dedicated staff of the organization and extends his deepest sympathies to the families of those killed and injured in this attack.

A news update from Nicholas Haysom, the Secretary-General's Special Representative for Afghanistan, emphasized that hospitals accommodating patients and medical personnel “may never be the object of attack,” and noted that international humanitarian law also prohibits the use of medical facilities for military purposes.

Mr. Haysom commended Médecins sans Frontières for its work, and expressed condolences to the medical personnel, their patients, family and friends.

“I reiterate my call on all parties to the conflict to respect and protect medical and humanitarian personnel and facilities,” the UN envoy added.

Meanwhile, the UN's Humanitarian Coordinator for Afghanistan, Mark Bowden, said he is “deeply concerned” for the MSF staff and their patients, and the loss suffered by the people of Kunduz. “The civilian population is now facing a further acute situation, finding themselves cut off from vital medical support,” he warned.

From Geneva, UN High Commissioner for Human Rights Zeid Ra'ad Al Hussein said there must be a swift, full and transparent investigation into the airstrikes that hit the clinic.

“This event is utterly tragic, inexcusable, and possibly even criminal,” Mr. Zeid said in a news release. “International and Afghan military planners have an obligation to respect and protect civilians at all times, and medical facilities and personnel are the object of a special protection. These obligations apply no matter whose air force is involved, and irrespective of the location."

According to MSF, pro-Government forces had been informed of the precise location of the medical facilities. While it has yet to be established whether or not the hospital or immediate surroundings were the target of the attack, or were recklessly endangered by it, airstrikes reportedly continued to hit the area for a further 30 minutes after pro-Government forces were informed they were endangering a medical facility.

According to the Office of the High Commissioner (OHCHR), a United States spokesperson has reportedly been quoted saying US planes were carrying out airstrikes at around the time the hospital was hit.

The UN human rights chief said it was essential to ensure any inquiry was independent, impartial, transparent and effective. “This deeply shocking event should be promptly, thoroughly and independently investigated and the results should be made public," he said.

"The seriousness of the incident is underlined by the fact that, if established as deliberate in a court of law, an airstrike on a hospital may amount to a war crime," he explained.

Also condemning the overnight bombing, UN Emergency Relief Coordinator Stephen O'Brien urged all parties to conflict must do everything in their power to distinguish between military and civilian targets, including medical facilities.

“This horrific bombing demonstrates the disproportionate risk for civilians when explosive weapons are used in urban areas. I call on all parties to refrain from using explosive weapons or conducting aerial bombardments in densely-populated places,” he said.

He joined the other senior UN officials commending the courageous work of MSF staff in Kunduz and the dedication of all humanitarian workers, national and international, who are risking their lives to help people in need. 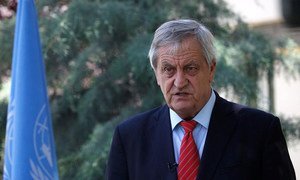 Amid reports of extrajudicial executions, abductions and other abuses in Kunduz following this week’s attack by the Taliban, the United Nations today reminded all parties to the conflict in Afghanistan of their obligations to protect civilians and to respect human rights at all times.