Speaking at the United Nations General Assembly, Muhammad Jusuf Kalla, the Vice-President of Indonesia, remarked that despite the achievements UN has made over the past 70 years, the Organization may fall short of meeting its primary objectives, such as peace and security for all, unless system-wide reform is immediately undertaken.

“Notwithstanding the achievements of the UN, we must not be complacent: indeed, there are still numerous challenges confronting us. As we speak, there are still numerous armed conflicts around the world. The suffering of the Palestinian people is still taking place, while the realization of a two-state solution is still elusive,” he said in his speech at the annual General Debate.

He spoke of sectarian conflicts, including the threat posed by the Islamic State of Iraq and the Levant [ISIL], which continues to threaten political stability and cause a multitude of humanitarian crises in the Middle East, especially in Syria, Libya and Yemen.

“We are also witnessing the worst year for human displacement and irregular migration since World War II due to political crises, sectarian conflicts and other humanitarian crises globally. In the past weeks, we have seen a flood of refugees fleeing from the violence in Syria, where well over one hundred thousand people have been killed, to seek a safe haven in Europe, despite the dangers and hardships they have to endure on the way,” he stated.

The Indonesian Minister also commented on economic disparity, poverty and inequality in a world where nearly 800 million people are suffering from severe undernourishment.

“The rich nations, comprising a mere 20 per cent of the world’s population, consume 70 per cent of [its] resources. In many parts of the world, women, children, youths, persons with disabilities, older persons, people living in conflicts and emergency situations remain marginalized and untouched by the progress of development,” he stressed.

He also stressed that world leaders have so far been unable to produce a universal agreement on climate change.

“We hope that the upcoming climate change conference in Paris can seal the long overdue agreement on climate. “We must ensure the realization of the Sustainable Development Goals (SDGs) in a timely manner. We must ensure that global development strategies are in line with the national conditions and priorities of involved countries.”

“All of these challenges are related to the lack of progress in the UN reform. Therefore, let us join hands in overcoming these challenges,” Mr. Kalla asserted. “We urgently need to realize UN reform […] the UN system has to be even more inclusive and must better reflect current global geopolitical conditions,” he added.

Lastly, he asserted that the international community today relies on the UN to create world order and peace and equitable prosperity, to guarantee security for the global community, and to fully implement the principles of human rights as enshrined in the UN Charter. 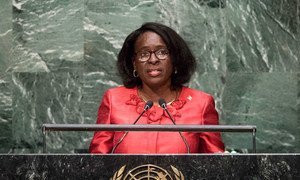