A senior United Nations envoy today welcomed an agreement between the Colombian Government and the Revolutionary Armed Forces of Colombia (FARC) that includes provisions not to grant amnesties for the most serious crimes, including sexual violence.

By the agreement reached on 23 September, the parties have agreed to create a Special Jurisdiction for Peace, which prioritizes the rights of the victims, including in the areas of truth seeking, reparations and guarantees of non-repetition.

“I am particularly glad that the parties have agreed that there will be no amnesties for the most serious crimes, including sexual violence. This constitutes a crucial step forward in the fight against impunity,” Zainab Hawa Bangura, the Secretary-General’s Special Representative on Sexual Violence in Conflict, said in a news release.

“The peace process in Colombia marks a milestone in explicitly addressing gender discrimination and sexual violence in the conflict,” added Ms. Bangura, who visited the country in March of this year.

“The establishment of a Gender Sub-Commission to ensure the integration of a gender perspective in the negotiations, and the participation of sexual violence survivors and leaders of women’s rights organisations in the peace talks are unprecedented and should be an inspiration for other peace processes around the world.”

Ms. Bangura was in Havana, Cuba, in May 2015 to discuss conflict-related sexual violence with the delegations of the Colombian Government and the FARC to the peace dialogue.

“It is essential that the protection and empowerment of women and girls remain at the centre of the peace talks in Havana,” the press release stated.

The 23 September agreement was also welcomed by Secretary-General Ban Ki-moon, who, in a statement issued by his spokesperson last week, commended the parties' commitment to place victims at the centre of the peace process.

“The announcements made in Havana by the parties represent significant progress towards reaching a final peace agreement and bring Colombia even closer to ending the hemisphere’s longest armed conflict,” said the statement. 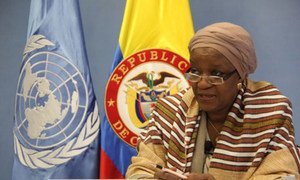 In eradicating sexual violence related to Colombia’s internal armed conflict, the main challenge now is translating resolve into tangible solutions in communities where the crime continues to occur, Special Representative of the United Nations Secretary-General on Sexual Violence said at the conclusion of her trip to the Latin American country.