UNICEF/Tomoya Sonoda
Girls in Damascus, Syria, shown in their classroom with school bags and stationery supplies they received from UNICEF and partners.
2 October 2015

Two senior United Nations officials today proposed the establishment of a humanitarian fund for education in emergencies that would offer millions of the world’s displaced children their first chance of schooling, as well as bridge the gap between relief assistance and development aid.

“We need a platform for education in emergencies that can fund without having to put the begging bowl around,” Gordon Brown, the Special Envoy for Global Education, told a news conference at UN Headquarters.

“In other parts of the world like South Sudan, the minute that you can achieve peace you should also be able to get the schools moving and you need a fund to be able to do so.”

Mr. Brown, who was joined by Anthony Lake, the Executive Director of the UN Children’s Fund (UNICEF), called on the international community to support the fund, which he said would help prevent schoolchildren from falling through the cracks.

“They’re caught between humanitarian aid, which necessarily has to focus on food and shelter, and development aid, which is not geared towards the short-term emergencies that we’re talking about.

“The humanitarian fund that we are proposing, which is a platform initially but hopefully will become a fund which should be agreed before the World Humanitarian Summit next year in Istanbul, should put us in a position where we can help children in emergencies.”

Mr. Lake said the plight of millions of Syrian refugee children illustrates the importance of acting in humanitarian situations with an eye to the longer-term development of the children and the societies.

“When you educate a child in emergency you are giving that child the skills with which someday to rebuild her or his society. So by definition, you are doing development while you do a humanitarian response,” he stated.

“If we do not give the Syrian children in Lebanon and Jordan and Turkey and elsewhere the education they need and the counselling they need to overcome the trauma that they have encountered, then they are neither going to have the skills nor the spirit of reconciliation someday to help to rebuild their country,” he said.

“On the contrary, we will see replicated, generation after generation, the same hatreds that have produced these conflicts in the first place.”

Yesterday, UNICEF and the European Union signed an agreement that will help enable more than 2 million children whose lives have been torn apart by the Syrian conflict to have better access to education in safe environments.

The grants worth $69 million will scale up UNICEF and the EU’s joint response in providing boys and girls with access to education in protective and empowering environments in Syria, Lebanon and Turkey.

Inside and outside Syria, there are 2.7 million children out of school; one in four schools in Syria cannot be used; 52,500 teachers have left their posts; and the loss of school infrastructure is estimated to be worth nearly $700 million.

In neighbouring countries, half of school-aged children are out of school especially in Turkey and Lebanon, and schools are over-crowded and under-resourced.

Referring to “the river of misery that is now flowing through Europe,” Mr. Lake said that the refugees and migrants are on the move because they are seeking better lives and a haven from the violence that they have been enduring.

“Therefore, they are moving into Europe, down this river, because, not just for the sake of their own welfare, but for the futures of their children. We cannot deal with that river unless we go to the headwaters and provide more education for the children there who are so desperately in need of it.” 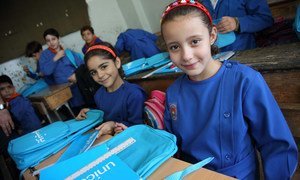 With more than 4 million children having left Syria – half of them for Lebanon, Jordan and Turkey – in a “crisis of biblical proportions,” the United Nations Special Envoy for Global Education today said $250 million could get 1 million refugee children in school by the time the UN General Assembly meets later this month.