“The impacts of climate change are already being felt the world over,” said Clarice Modeste-Curwen, warning that without a successful legally binding agreement in Paris, “we will see climate change continue unabated.”

She went on to note that the Assembly has already recognized the “unique vulnerabilities” of small island developing States (SIDS) regarding climate change, and urged the Security Council to “continue to give greater consideration to [their] special circumstances…in relation to both traditional and non-traditional security concerns.”

Addressing the need for a climate change framework, she calleed for an “immediate consensus” on the issue, particularly with regard to financing.

Turning her attention to the recent resumption of diplomatic relations between the United States and Cuba, Ms. Modeste-Curwen said “Grenada applauds the progress made in the recent rapprochement” between the two countries.

“Grenada sees this peaceful resolution, through dialogue, as an example to be emulated between and among all States where violence, conflicts, and disputes prevail,” she continued. “However, Grenada joins in the call for the total lifting of the commercial and financial embargo imposed on the sister island of Cuba.”

In his remarks, the Prime Minister of Barbados, Freundel J. Stuart, stressed the importance of global cooperation to end climate change.

Mr. Stuart also noted that Barbados, along with all the countries of the Caribbean Community (CARICOM), urged all those taking part in the upcoming climate change conference in Paris to “commit to take individual and collective action to curb greenhouse gas emissions in line with our ambitious goal to hold global average temperature increase to well below 1.5 degrees Centigrade above pre-industrial levels.”

Noting the devastating effects of Tropical Storm Erika on the Caribbean nation of Dominica, Mr. Stuart also took the opportunity to express his region’s “unwavering solidarity with and commitment to our brothers and sisters in Dominica and call on the international community to continue to help [the country] in its hour of need.”

Also addressing the Assembly, the Prime Minister of Saint Kitts and Nevis, Timothy Harris, among others from the region, noted the importance of the climate change and the development of renewable energy sources.

“Climate change for us is of utmost importance,” said Mr. Harris, “it remains an existential threat.”

“They threaten food security and bring hardship on our people,” he said. “We would like consideration to be given not just to climate change adaptation and mitigation, but also disaster response, recovery and insurance,” he added, underscoring the financial burden of climate resilience initiatives.

He also said his delegation welcomed the establishment of a SIDS facility that would “serve as a clearing house for implementation of climate related projects in small island developing States.”

Mr. Harris also noted the importance of renewable energy resources, and said his country had “emerged as a leader in renewable energy development in the Caribbean” and is “working assiduously to reduce our dependence on fossil fuels and so reduce our carbon footprint.” 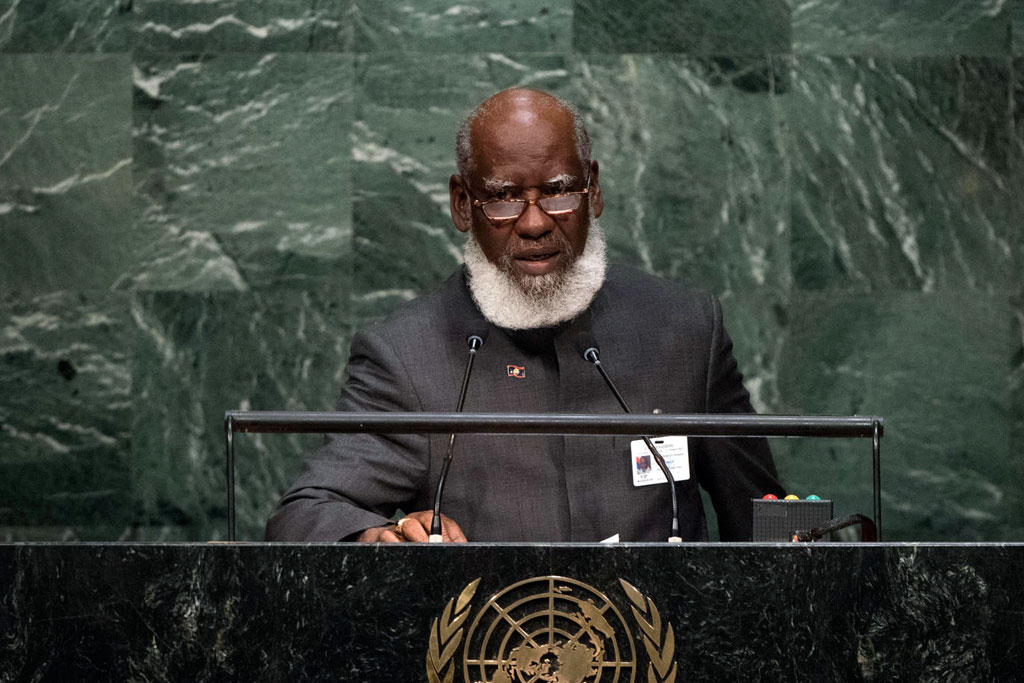 Wilfred Elrington, Attorney General and Minister for Foreign Affairs and Foreign Trade of Belize, addresses the general debate of the General Assembly’s seventieth session. UN Photo/Cia Pak“The accelerated phenomenon of climate change giving rise to the inexorable melting of the glaciers, the rising and warming of the oceans and seas, the spawning of super typhoons, hurricanes, tornadoes and floods, droughts, desertification and the indiscriminate igniting of conflagrations of gigantic proportions, are, increasingly attributed to anthropogenic interference with the climate system,” he said.“In its 70-year history, the United Nations has made notable inroads to combat climate change and to promote sustainable development,” he continued, but there is still work to be done.

“Notwithstanding a commitment to tackle climate change, our efforts have been less than ambitious, and achieving a successor global emissions reduction regime hangs in the balance, not the least because finance and technology are conspicuously wanting, Mr. Erlington continued.

In his remarks to the General Assembly, the Minister of Foreign Affairs and Foreign Trade of Jamaica, Arnold J. Nicholson, also highlighted the existential challenge posed by climate change for the people of SIDS.

“A key part of our work will be to ensure that, as we implement the new development paradigm, we fully address the unique vulnerabilities of SIDS, and the persistent economic and social challenges of countries in special situations, such as Middle income Countries,” he said. 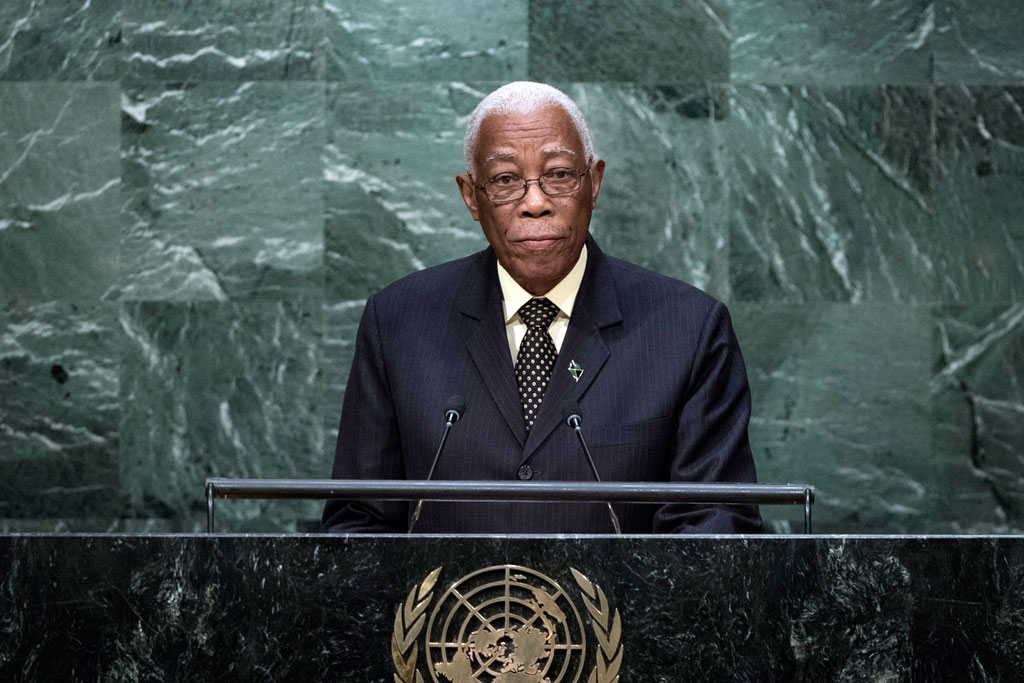 “It is an unfortunate fact that such events will certainly occur again. In fact, another member of our Caribbean family, the Bahamas is now being pummelled by Hurricane Joaquin,” he said.

“In spite of this however, the international community can assure the impact of the next natural disaster on our small island and low-lying coastal countries is lessened by helping us to improve our resilience in the face of these increasing calamities.”

The Minister then turned to intra-State conflicts and terrorist activities that “have transformed the geopolitical landscape and increased the threats to international peace and security.”

He also made reference to “the brutal tactics of violent extremists such as ISIL [the Islamic State of Iraq and the Levant], Boko Haram and Al-Shabaab,” and noted that “transnational organized crime and the presence of weapons of mass destruction continue to threaten international peace and security, while the proliferation of conventional arms in the hands of non-State actors poses a grave risk to many countries and regions.”

The Minister of Foreign and CARICOM Affairs of Trinidad and Tobago, Dennis Moses, addressing the General Assembly, spoke of the threat of climate change, particularly for SIDS and least developed countries (LDCs). 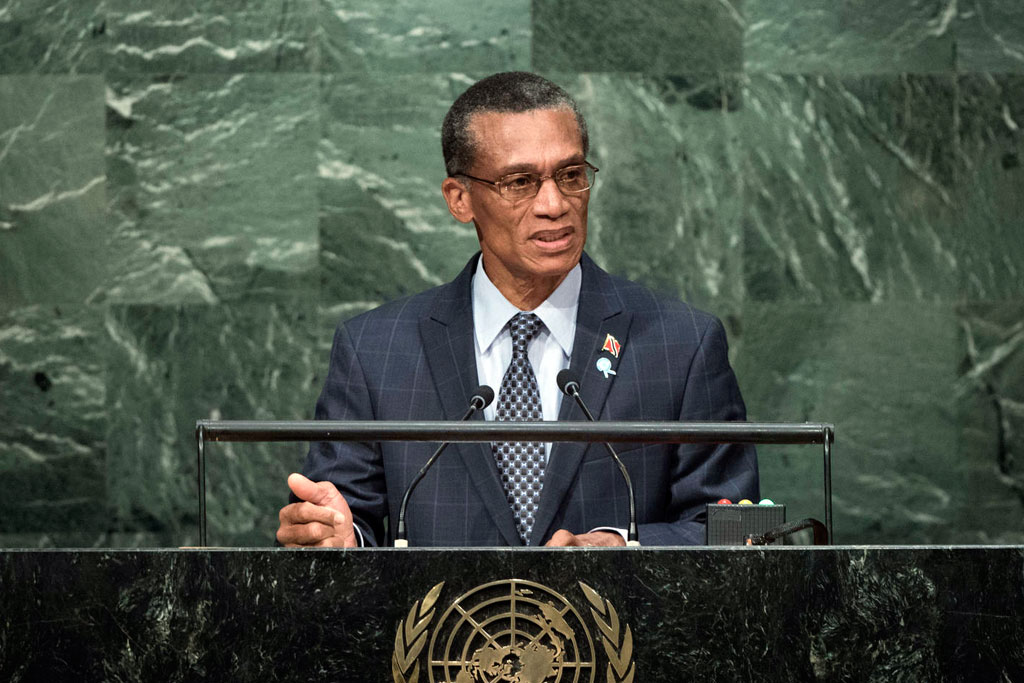 “Like many other small island developing States, Trinidad and Tobago is at high risk of being severely affected by the devastating effects of climate change,” and has therefore made mitigation measures a national priority, within the practical constraints of its limited financial capability.”

He went on to say that climate change is closely linked to development.

“Recognizing the need for bold and responsible action on the part of all Governments, albeit on the basis of common but differentiated responsibility, Trinidad and Tobago has adopted a proactive posture on this issue and has submitted its Intended Nationally Determined Contributions to the UN Framework Convention on Climate Change (UNFCCC), ahead of the 2015 Paris climate conference,” he said.

He said that the agreement reached in Paris should be legally binding, and ensure that an increase in average global temperatures were limited to less than 1.5 degrees Celsius above pre-industrial levels.

Also addressing the Assembly, the Minister for External Affairs for St. Lucia, Alva R. Baptiste, took up the issues of migration and climate change. 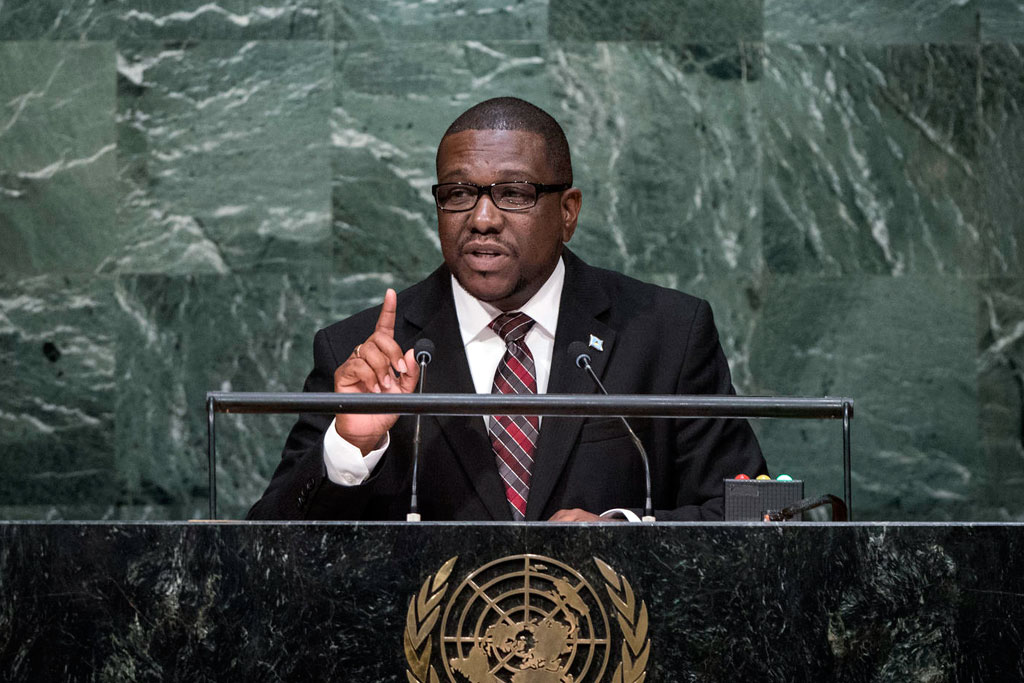 “Today many of our Middle-Eastern brothers and sisters in Iraq, Libya, Syria and elsewhere find their lives transformed by graphic experiences of, disturbance, personal trauma, and in some instances much physical and mental pain,” he said.

“Suddenly, the leaders and peoples of the European countries to which those migrants on the move have sought refuge, find themselves gripped by surprise and concern as they search to find the correct reaction to this humanitarian crisis,” Mr. Baptiste continued.

“We can well understand the dilemma faced by receiving countries that have to balance their particular national interests against their wider global responsibility.”

He also noted that “we want to encourage and assure them that the right thing can and must be done.”

Turning his remarks to the subject of climate change, he said that “small States like Saint Lucia face growing insecurity as climate change unleashes increasingly deadly and destructive disasters upon us.”

CLIMATE CHANGE FOCUS: The fruits of sustainability and decent work

Chilean President Michelle Bachelet, one of several leaders from the Latin American and Caribbean region to address the General Assembly today, warned of the urgent need for United Nations Member States to react to the plight of refugees, which she said had become a global crisis affecting peace and security.