Delegations from Rwanda and 11 major host countries in Africa, the African Union and the United Nations refugee agency today agreed on a timetable to resolve the situation of Rwandan refugees who fled between 1959 and 1998 – one of the world’s longest-standing displacement situations.

The timetable aims to help former refugees who wish to return to Rwanda by December 2016 and to intensify local integration efforts for former refugees who have developed close links with their host communities by the end of 2017, according to a news release issued by the UN High Commissioner for Refugees (UNHCR).

“This is a beacon of hope, showing that even in today’s world with multiple conflicts and growing displacement, it is possible to resolve refugee situations,” said UNHCR’s Assistant High Commissioner for Protection Volker Türk.

Today’s meeting in Geneva is part of the concluding phase of a comprehensive strategy to end the Rwandan refugee chapter, which has four components: voluntary repatriation to Rwanda; local integration or legal alternatives in countries of asylum; retention of refugee status for those still in need of international protection; and the cessation of refugee status.

In June 2013, UNHCR recommended that refugee status could be ceased for Rwandans who had fled their country before 31 December 1998.

“African countries have set an example to the world by looking at local integration as a real possibility for tens of thousands of Rwandan former refugees,” Mr. Türk observed.

In the wake of the 1994 genocide in Rwanda and the armed clashes in the northwest of the country in 1997 and 1998, more than 3.5 million Rwandans became refugees. All but 48,000 have now found a solution that allowed them to close the refugee chapter of their life. Most of them returned to Rwanda and others were able to remain in a different capacity in their former country of asylum.

There is also a large group of Rwandans living in eastern Democratic Republic of the Congo. Some 24,000 have been registered, but Government pre-registration estimates stand at nearly 250,000 people. Biometric registration is expected to be completed by the end of January 2016 and will provide a better idea of how many people are involved and what the best solution would be for them.

Participants called on the international community to support this final phase of the process, to ensure that remaining former refugees can successfully integrate in Rwanda or be productive members of society in their former country of asylum. 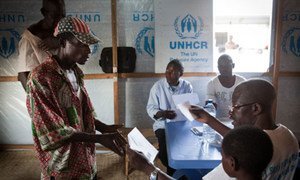 The United Nations refugee agency reported today that it has embarked on the implementation of a set of strategies to conclude three of Africa’s long-standing refugee crises that involved helping people uprooted by old conflicts in Angola, Liberia and Rwanda.