The United Nations humanitarian chief called on all those involved in the violence in the Central African Republic (CAR) to end the hostilities and immediately allow the resumption of assistance.

In a statement issued in New York, Under-Secretary-General for Humanitarian Affairs Stephen O’Brien said he is “extremely alarmed” by the recent upsurge in violence and by attacks on humanitarian premises.

The capital, Bangui, had been the scene of attacks against civilians, violence between communities and attacks against humanitarian personnel since a young Muslim man was murdered on 26 September. More than 30 people have been killed and over 100 have been wounded in the violence.

Mr. O’Brien said that ongoing violence by armed groups is preventing humanitarian organizations from reaching more than 42,000 women, men and children who have fled for their lives in the past few days in Bangui.

“People are living without the most basic necessities because humanitarian NGOs [non-governmental organizations] and UN agencies cannot reach them,” he said.

“As in the past, humanitarian organizations are determined to stay and deliver for the people of CAR,” stated Mr. O’Brien, who is also UN Emergency Relief Coordinator.

He added that outside Bangui, the situation is also deteriorating, with movements of armed groups spreading panic amongst the population. Across the country, more than 412,000 people have fled their homes. Some 2.7 million people, more than half the population, depend on humanitarian aid to survive.

“This recent outbreak of violence is a huge setback for CAR and for the international community,” Mr. O’Brien said.

“I call on all those involved to end the violence and to allow the resumption of humanitarian assistance immediately,” he stated, noting that deliberately impeding access to those in need is a violation of international law.

Also today, the UN peacekeeping mission in the country (MINUSCA) reported that the situation in the capital remains relatively calm but tense in the last 24 hours with sporadic looting activity. It continues to take measures to prevent a further deterioration of the situation in order to ensure protection of civilians and safe passage along key axis routes within Bangui. 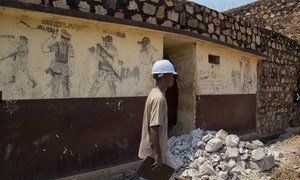 United Nations officials continued to voice their concern today over the situation in the Central African Republic (CAR) – where more than 30 people have been killed, over 100 have been wounded and thousands are seeking shelter amid the recent upsurge in violence – and stressed the need for free movement for aid workers to reach those in need.