Islands States from the Pacific and Caribbean took to the podium of the United Nations General Assembly today to call for urgent action on climate change, with one leader warning that their people and culture face “potential genocide” from rising seas.

“I speak as an islander who has walked the shores of many atoll islands, where there was once sandy beaches and coconut trees. Now there are none. I am told this will continue,” President Peter Christian of Micronesia told the Assembly on the fourth day of its 70th annual General Debate.

“While we wait in fear for the predicted and inevitable sea level to rise, other effects of global warming, like stronger ocean currents and more frequent typhoons, continue to wash away shorelines and topple tress, not waiting around for the sea to rise above the land.”

Mr. Christian voiced hope that the international climate change conference in Paris in December would resolve the disagreements over allowable emissions of greenhouse gases by industrial nations.

“We must become more cohesive in our actions to bring a useful conclusion to help mitigate the threat of sinking islands and prevent the potential genocide of Oceanic peoples and cultures,” he declared.

Solomon Islands’ Prime Minister Manasseh Sogovare said the issue was existential. “It impacts on everyone, but the poorest and marginalized populations often bear the greatest burden. It is imperative that the Paris Conference delivers an ambitious, comprehensive and robust climate change Agreement that is inclusive and leaves no one behind,” he added. 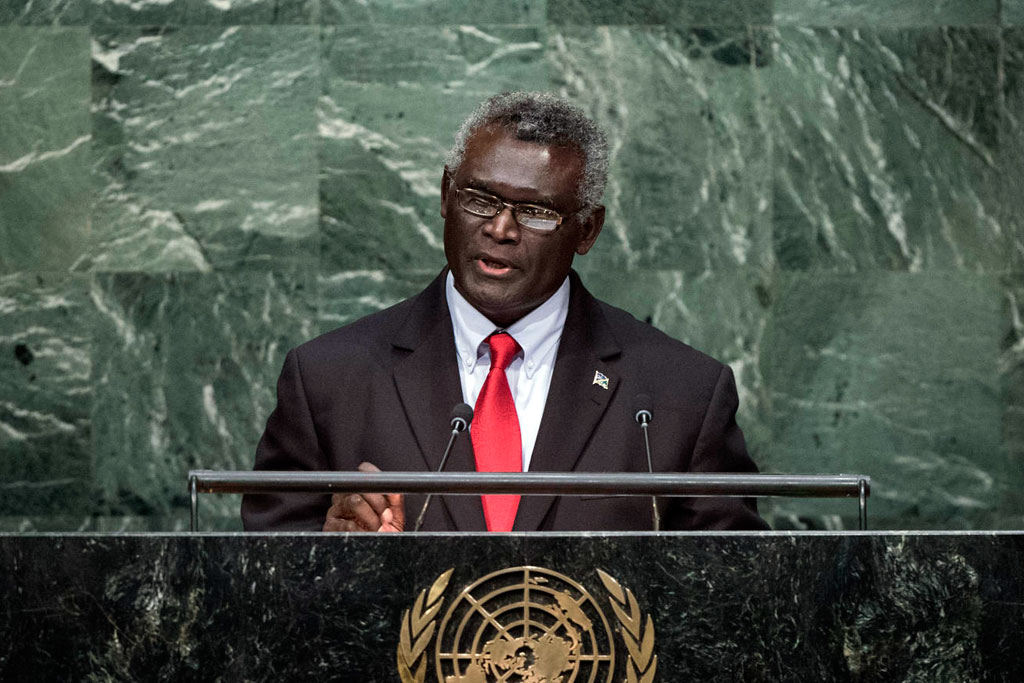 He noted that Solomon Islands tourism, fisheries and the livelihood of 85 per cent of its people are at risk from ocean acidification. Sea level rise already has seen land inundation, loss of biodiversity, threat to food security and the resulting relocation of populations from low lying islands to other parts of the country. Prime Minister Gaston Browne of the Caribbean State of Antigua and Barbuda chided the industrial world for its long-standing emission of globe warming gases for which the less developed islands are now paying the price.

“The sadness is that these disasters are not occurring in these islands through their own fault,” he said. “They are happening because of the excesses of larger and more powerful countries, who will not bend from their abuse of the world's atmosphere, even at the risk of eliminating other societies, some older than their own,” he said.

“All industrialized nations should accept their responsibilities as the chief contributors in emitting high levels of greenhouse gases into the atmosphere,” he declared. 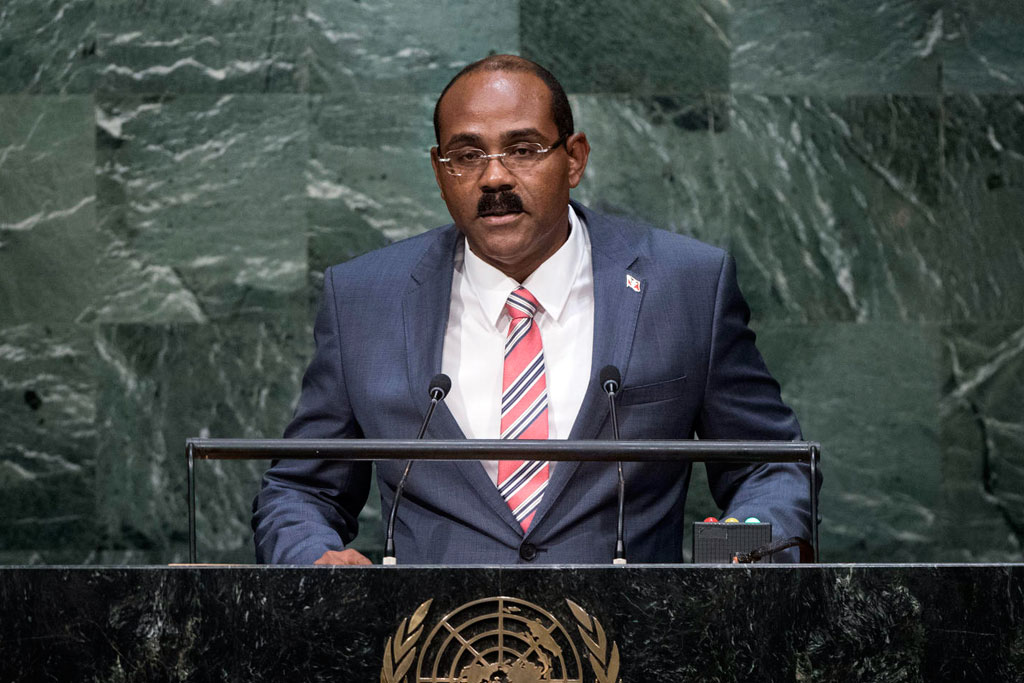 Mr. Browne also condemned the recent listing in the United States and Europe of many Caribbean and Pacific Island States as “tax havens” and warned that “such wrongful tarnishing” could lead to US and European financial institutions cutting relations with their banks. “If that happens, no one in our small States will be able to pay for any goods or services purchased from the United States and Europe, including food, tuition for our young studying abroad and medication and medical bills for our people in need of specialist treatment,” he explained.

“The consequences would be disastrous, since we would be excluded from the international payment system and would be unable to settle our trade and investment transactions. Our banking system would collapse, our economy would be irreparably damaged and our people would be plunged into abject poverty.”

The need for a binding agreement at the Paris climate change conference was echoed by Bahamas Foreign Minister Frederick A. Mitchell who urged all countries to work toward its success. 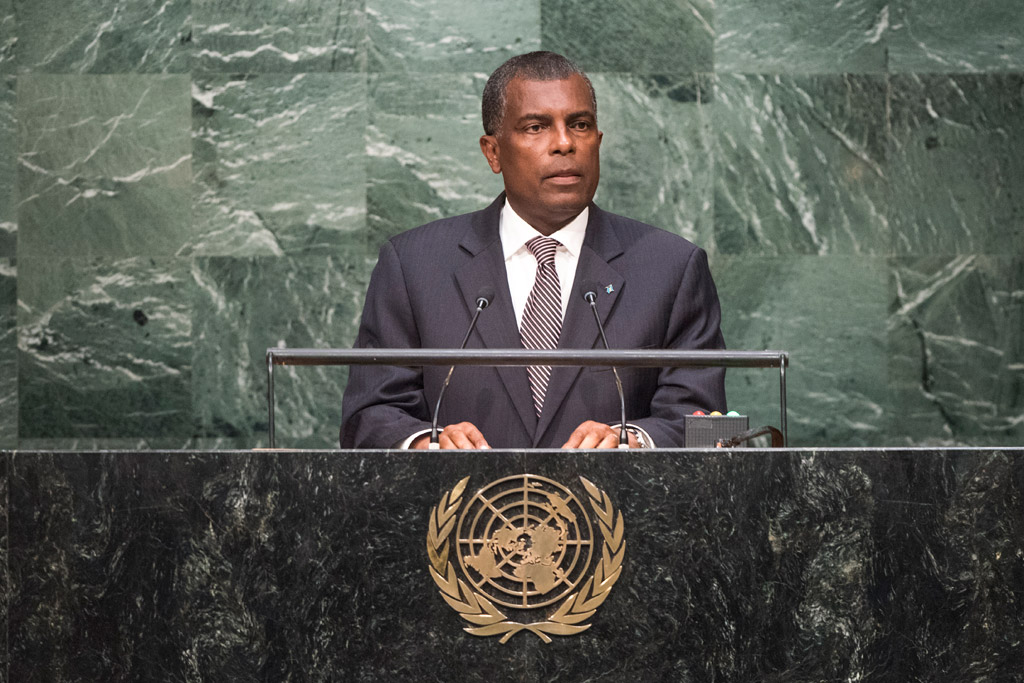 “Even as we speak, The Bahamas is under the threat of flooding and a hurricane,” he said. “This reinforces the existential threat of climate change to our country.”For his part Foreign Minister Rimbink Pato of Papua New Guinea called on the UN Security Council to deal decisively with the implications of climate change. 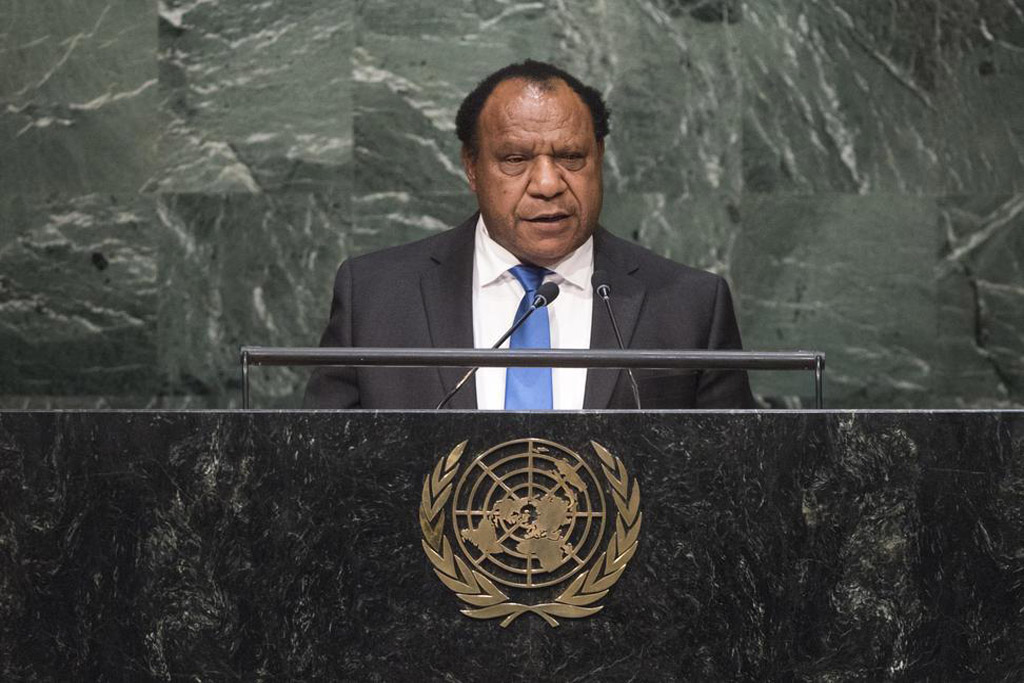 “Climate change poses imminent dangers with wide ranging implications, including threats not only to human security, survival and development, but also to the entire global ecosystem,” he said.

Speaking today at the United Nations General Assembly, the Prime Minister of Fiji, along with the leaders of other small island developing States, warned of the existential threat of climate change and looked forward to the possibility of consensus at an upcoming UN climate conference in Paris.